Stop number one for many people when visiting Sumatra is Lake Toba.  I had heard good things, so I wanted to check it out for myself.  A volcanic lake stretching for miles, Lake Toba is the perfect place to chill out, get into some local culture, crash a motorbike, and perhaps rescue some kittens.

People in other towns around northern Sumatra will roll their eyes and say this is just a fable that the older generation tells the younger boys, but I like to believe it’s true.

The Batak people used to be cannibals, but not just any cannibal. The Batak people used to eat people raw. Yes, raw!  This treatment was reserved for the most evil of criminals, who were to be tried at what has now become a tourist hot spot — the stone chairs — and then executed in front of a crowd of townspeople who would later feast on his raw remains.

It was the Germans who eventually converted the Batak people through offering educational opportunities and who earned the Batak people’s respect through learning the local language.  As they are now predominantly Christian, this practice has died off.

The Crashing of the Motorbike

One of the things Lake Toba is famous for is its island lake within a lake.  Wanting to see it for ourselves, my friends, Manny and Olivia, and I took a motorbike around the island and up towards the lake.

“The roads are very bad once you head off the main one,” warned the guesthouse owner.  I had heard that before and it had fallen on deaf ears then, just like it would now.

Unfortunately for me, she turned out to be extremely right.

The vistas from the drive made it worthwhile.  The lake within the lake, however, was not all that impressive.  Made treacherous by the giant rocks and sand that served as a rather steep road, I found it fine going up, but not so much coming down.

Before I knew it, my brakes forced my back wheel to catch on a rock (or sand? Who knows?) and spin out of control, causing the bike to fall to the left while I managed to jump off and flail to the right, somehow landing on my feet without so much as a scratch or bruise.

The bike already had scratch marks prior to my blunder, so returning it and saying, “Nope! No problems with the bike!” didn’t end up being an issue.

I’m counting my blessings, considering how many of my backpacker friends have motorbike crash stories and the scars to prove it.

Genius that I am, I left my camera in the seat of the motorbike (they lift up, providing a storage compartment) when I had returned it.  Manny saved the day by going to fetch it and, on his way back, he noticed some orphaned kittens running across the road.

Searching for the mother, he found nothing.  The local with him pointed to the trash can nearby and said they had climbed out.  Someone had clearly dumped them in there.

Trying to serve as savior to three adorable 2-week-old kittens, Manny asked a guesthouse owner, who we knew to have a small farm and some animals (namely, bunnies), if he could take them in. He said that he could, but only on the condition that we book three nights of accommodation with him.

Looking but finding nobody who was willing to take the cats, Olivia announced, “We’re taking them to Bukit Lawang!” knowing that the kind hearted locals there would surely take them in.

With that, a couple days later, the kittens were in a backpack on a ferryboat, then on an 8-hour car ride, and then in a jungle town in northern Sumatra known as Bukit Lawang.

There, they would find their new home, and I would fall in complete awe and fascination of this little jungle town – but that’s a story for another time. 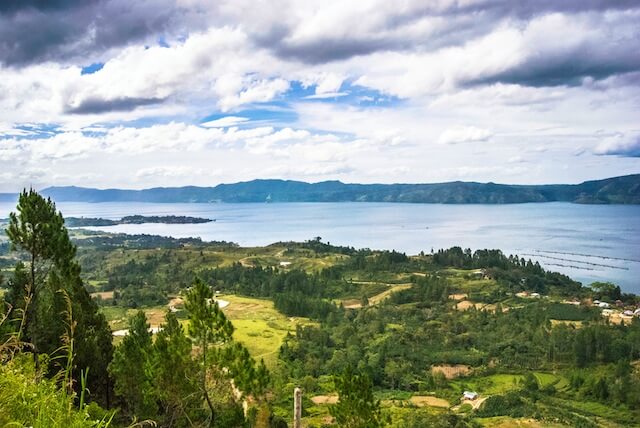 0 shares
« Is the Life of a Solo Traveler Bound to be a Lonely One?
The Incredible Orangutans of Sumatra »