Nestled in the shadows of Mount Rinjani lies the tiny village of Senaru. Regarded as the gateway for Mount Rinjani, Senaru is a hub for travellers eagerly awaiting their fate on Lombok’s highest mountain. With many disregarding the village as merely a transit stop, we decided to take a closer look around and see what it has to offer!

Though we had completed the treacherous hike to the summit only the day before, we were desperate for somewhere to relax for several hours before we moved South – preferably at ground level as we didn’t think our feet could take much more!

As we tucked into our breakfast of banana chocolate pancakes, we got chatting to the locals who seemed to have permanently reserved a table at our guesthouse restaurant! Asking us of our plans, we told them we were heading off to explore. “Maybe you will like to see the waterfalls?” Our ears pricked up! Waterfalls? This was exactly what we needed.

They proceeded to show us a map on their phones with pictures of a popular waterfall visited by many who have scaled Rinjani (want to know how? Check out this guide on trekking Rinjani). Taking advantage of local knowledge and being the adventurous souls that we are, we were eager to find out if there were any hidden gems if we waded deeper into the jungle. One of the guys explained that there was a better waterfall, mainly visited by locals just past the popular tourist spot. We were in luck! As he started pouring out directions left, right and center, he explained that we would still enter the national park, but would veer right down a dirt path just before the popular waterfall. Trying to reiterate the directions and seeing our confusion, he offered to give us a lift! “It’s not too far” he assured us!

We hopped onto the back of their scooters and made our way along Jl. Pariwisata, up the hill and through the village. I don’t know how we hadn’t spotted it before, but hand made signs had been knocked into the grass verge with arrows leading the way to the entrance of the national park which stood just off the road to the left. 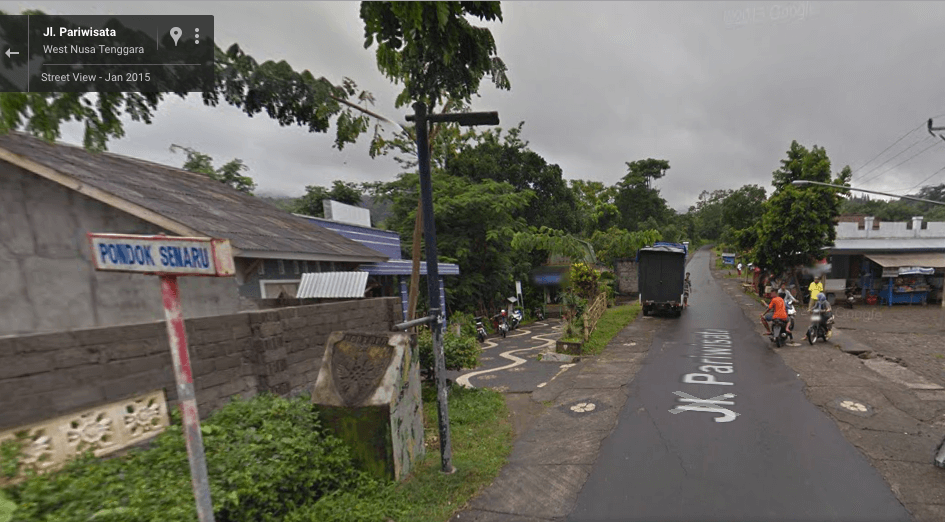 The entry to the park costs just 10,000IDR, less than $1! But as with most areas that attract tourists, they also attract local touts trying to sell their “guide” services. We’d been warned of them by the guys from the guesthouse, who had told us that it was best to use one of the local guides but not at all necessary. As soon as we jumped off the bikes they approached us. Some were quite forceful in selling themselves, making the waterfall seem difficult to reach without their knowledge and expertise… We chose to go it alone, a decision we definitely didn’t regret!

Heading past the ticket office we followed the tour groups down the path down and through the jungle toward the well-known Sendang Gile waterfall. The water plummeted toward the river below, crashing against the rocks and we couldn’t wait to get under, although we did have to bide our time and wait for the tourists to get their shots … and we thought we were bad for taking photos!!

But as the groups stood and marveled at the lone plume of water, we knew what lay ahead and not content with the one waterfall, we needed another fix. As everyone continued back to the ticket office, we spotted the dirt path on the left, which would take us to Tiu Kelep.

Venturing on we followed the path before reaching a bridge. 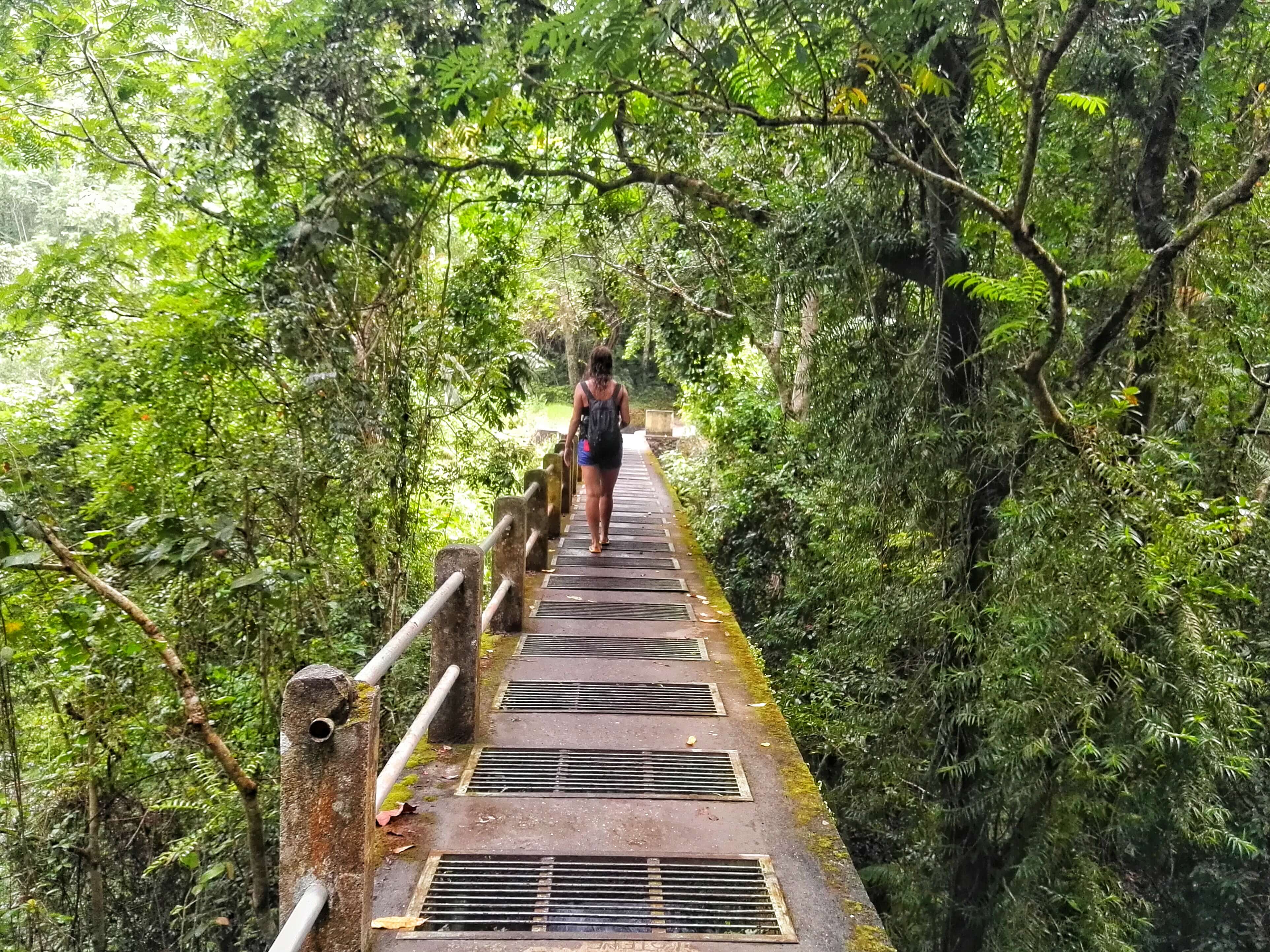 On the other side of the bridge, we walked by the waterway and past a yellow dam structure. We were met by two rivers that we needed to cross, the first slightly calmer than the second.

After a few minutes, the colossal sound of the waterfall pounding the river below filled the mist-drenched air. Only a few boulders stood between our destination and us. Our hearts began racing as we clambered over the rocks, eager to catch our first glimpse. 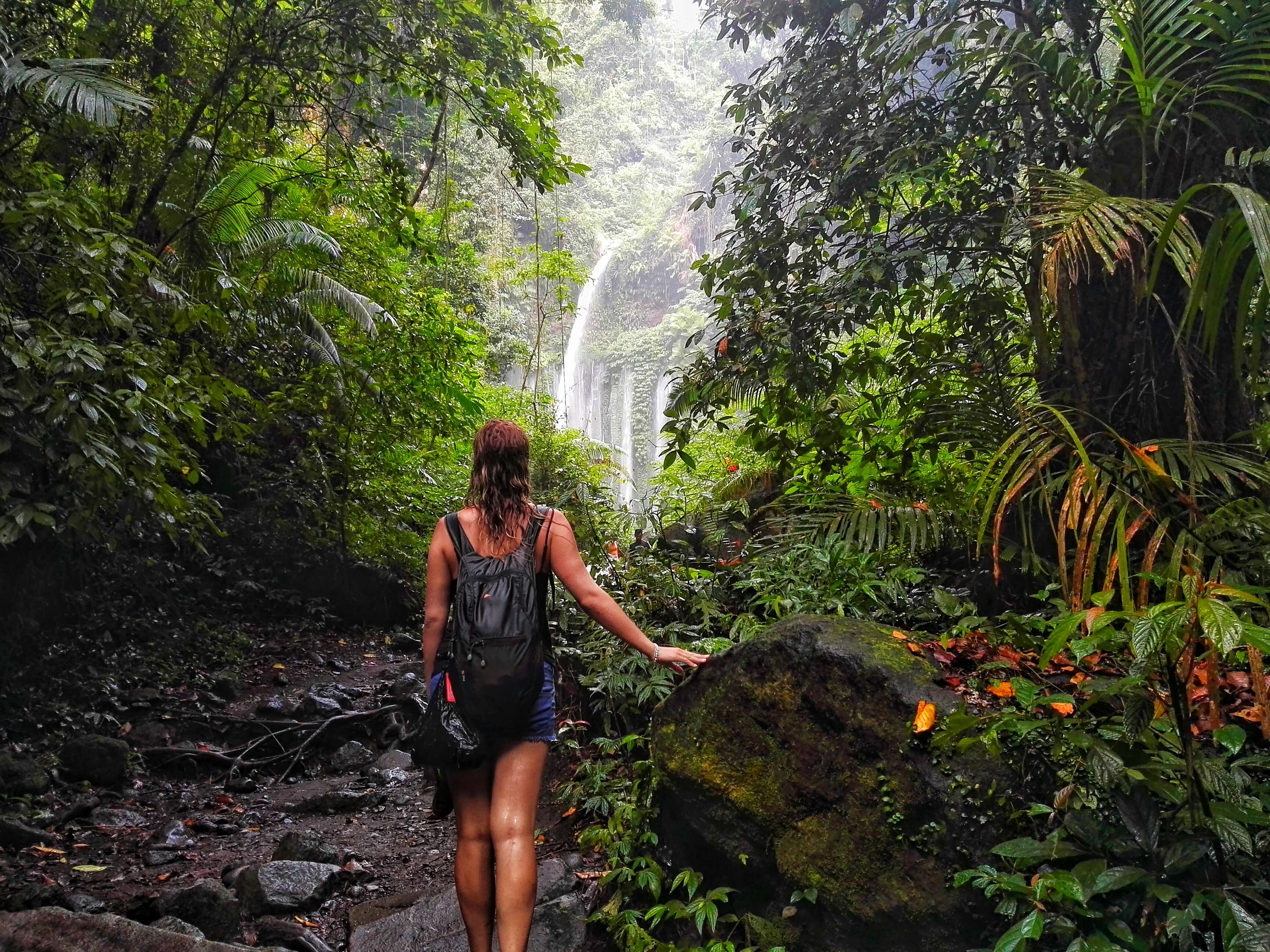 As we set our eyes on the waterfall, we were transfixed, the cold spray creating rainbows on the surface of the water. The mighty Tiu Kelep. Senaru’s best kept secret. A plethora of waterfalls meeting at the end of their journey, it truly was magical. The freezing water nipped at our skin.

Its sheer force kept us at arms length as we laid back and gazed at the size of this natural phenomenon. Lush, green forests surrounded us as Rinjani peered over the rocks reminding us of our feat the day before. Alone in the jungle with nothing but each other and Tiu Kelep for company, this was the perfect way to end our time in Senaru.

About the Authors: Charlie and Charlotte are the wanderlusting couple behind TheWanderLovers.com. They have swapped their city life in London for an action packed journey across the globe. Hand in hand, they’re taking on one country at a time and creating a life they don’t wish to escape from! Through their couple’s travel and lifestyle blog they hope to inspire future travellers that anything is possible if you just buy that one way ticket … One Life. One Love. Live. Follow the journey on Instagram, Facebook, Flickr and YouTube.