Kawah Ijen was one of the most brilliant parts of my trip so far, which is saying a lot considering that I have now logged about 8 months traveling all over Southeast Asia. It was also a challenge to do solo and independently of a tour, as online information was scarce and Kawah Ijen is a little more off the beaten path.

But I’m simply not a tour person. I almost always shy away from them because they cost more and take away from the local experience.  Though it was definitely done with less ease, I don’t regret my decision to do this independently for a second.

Thankfully for you, I’ve now done the legwork to find the information to make this a bit easier moving forward for the independent traveler.

This is how to do Kawah Ijen without a tour:

From the bus depot in Bondowoso, a morning bus leaves daily bound for Sempol – the closest town to the volcano. Hire a bicycle taxi for a dollar or two to take you from your hotel to the bus depot.

As for exact timing of the bus departure each morning, it’s tough to say. I was told 7am, 9am, and 10am. Like traveling elsewhere in Indonesia, departure time probably just varies. I arrived at 9am and waited for only 20 minutes.  As soon as I pulled up at the bus station, everyone knew exactly why I was there and pointed me to the correct bus.  How nice of them.

The ride up took around 2.5 hours as it made frequent stops for supplies. The cost was 35,000 rupiah, which I thought was a rip-off until running into a fellow independent traveler who was charged 50,000 for the same ride the previous day.

I turned left down the road from the bus stop in Sempol and walked the 1km to Arabica Homestay (the intersection will have a sign advertising tourist information). I was honestly a little hesitant to stay there given the poor TripAdvisor reviews, and after dealing with the very unfriendly staff that also tried to overcharge me for some noodles (initially quoted 7,500 then demanded 10,000), I stand by my hesitancy. However, since information was hard to come by, I went with that. I have since found out that Campir Guesthouse, closer to the trail entrance, is another option. Hire an ojek (motorbike taxi) from the bus stop to get there for around 30,000 rupiah – be sure to bargain.

Part of the risk of approaching this without a tour is the potential of the rooms being booked out by tours. In this scenario, there are always homestay options. That said, they can be overpriced for what they deliver, so bargain hard on those as well. I found that they would often ask where I was from before quoting a price, determining how much I could likely afford given my home country (hint: America is the WRONG answer).

There are a couple of warungs (small eateries) in town that provide cheap food as well if you want to avoid costly guesthouse pricing for dinner.

I’ve read online accounts and met plenty of tourists who didn’t see the blue flames or the sunrise.  Absolutely don’t miss them! The volcano is beautiful but hiking in with the stars, getting up close to the blue flames and viewing the truly stunning sunrise were what made this trip so wonderful and unique.

Ask your guesthouse to organize an ojek driver for 1am (2am would probably also be alright although it would be pushing it). Cost should be anywhere from 40-60,000 rupiah. Again, bargain on this. The driver will drop you at the entrance where you will be approached by offers for guides. A guide really isn’t necessary as the path is obvious.

Hiking in with the stars made it a really beautiful experience. The initial 1km was a steep climb but it evened out after that. Upon reaching the volcano crater, a rocky and steep path leads down to the blue flames. Plenty of workers are already there preparing to carry down their first load of sulfur. Some will attempt to lead your way and will ask for a few thousand rupiah in exchange for guiding you. This may be worth it given their unique knowledge – especially if you’re amongst the first to arrive, as I was.

Hike back up and farther along the crater rim after you have your fill of the blue flames. Locals can point out the way to you. View a stunning sunrise from the top of the crater.

Upon climbing back down, the masses of tour groups passed me by. They had really missed out. Save for a couple other tourists, I almost had the sunrise vista and the blue flames all to myself.

Upon reaching the end of the trail, there were plenty of private busses and ojek drivers around. One can either catch a public bus back down to Bondowoso and then take a bus from the terminal onward from there to one’s next destination, or organize transport with the private tour companies staying in your guesthouse to Bali at the end of your trek, if that is your next desired spot. I ended up hiring an ojek to bring me back to Arabica where I slept, departed around 12:30pm for the public bus, and waited at the stop. I was told it would arrive anytime between 1pm and 4pm. In the end, I was offered a ride and ended up hitch-hiking back to Bondowoso, but that’s a story for another time.

Do Kawah Ijen, and do it independently. It was an experience of a lifetime. You will need:
• Proper shoes – hiking shoes or at least running shoes
• Travel Insurance – you’ll be hiking, it’s dark, ’nuff said (that is an affiliate link to the company that I get my insurance through)
• Something to cover up with – it will be cold
• A headlamp or flashlight (torch) is essential
• A gas mask or at least surgical mask would be a huge help if you get close to the blue flames given the sulfuric gas. I didn’t bring one but I wish I had 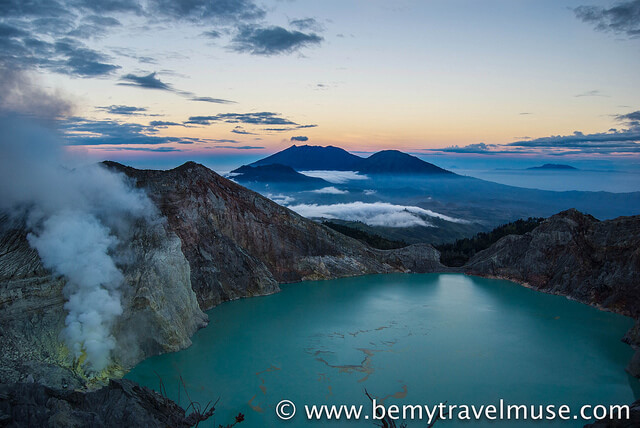 65 shares
« The Hands Down Worst Travel Day Ever
Muay Thai: The Best Venues to Watch Thai Boxing in Thailand »