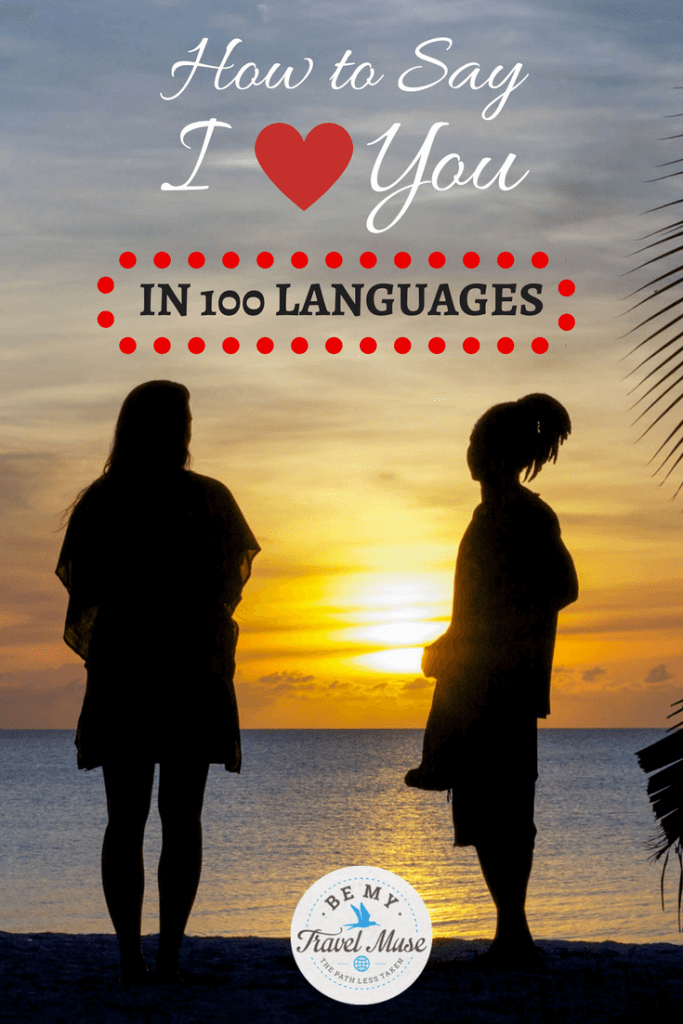 One of the coolest things about traveling the world is learning a little bit if the local language.

It’s amazing how much you can learn about a culture based on how they express themselves. There’s always an expression or a word that doesn’t exist in other languages, or seems special based on the collective mentality of that particular culture. It’s amazing to think that through all of the years, wars, and our existence as human beings – one thing remains, our method of communicating using language and our ability to love.

As Valentine’s Day quickly approaches, I started to wonder, how do people say ‘I love you’ around the world? I already knew it in French, Spanish, German, Mandarin, Korean, and English of course, but what about the other languages of the world?

So here it is, after hours upon hours of searching and research, this is how to say I love you in different languages – to be exact the 100 most spoken languages in the world:

Here are the languages in order of how many people speak them, how you say ‘I love you,’ and where it is spoken:

The next most spoken language is German, but ‘I love you’ in auf Deutsche has several layers, and can be a lot more specific. For example, to tell someone you love for them more in an ‘I care for you’ kind of way, you would use ‘Ich habe dich gerne’.

Next is ‘Ich hab dich lieb’, which is kind of like, ‘I have love for you’ and is used for friends and family. Between lovers, ‘I love you is’ expressed as ‘Ich liebe dich.’

Swahili is the most widely spoken language in Africa with about 100 million speakers, and is the national language of Kenya, Tanzania, and Uganda.

Swahili is said to have originated from Arabic, among other languages. It’s possible the language came from interactions between Arabs and East Africans back in the day.

So whether you’re telling someone je t’aime, wo ai ni, nakupenda, or I love you, you can say it in 100 different ways today.

And of course, there’s always the good old fashioned hug and kiss, though that can vary widely from region to region too!

‘Til next time we see each other, jag älskar dig!

Note: Language rankings sourced from International Phonetic Alphabet based on number of speakers, and the 13th edition of Ethnologue via David P Brown. Translations sourced from Google translate and a myriad of other sources. If you see an error here, please comment and let me know!

Welcome to Be My Travel Muse, a travel community geared towards the adventurous, off the beaten path-loving traveler.