Lugu Lake is a place I had never heard of and would probably never have visited if it weren’t for Ya Ting, my travel buddy in Yunnan province. It straddles the border of Yunnan and Sichuan provinces, providing the perfect doorway to a province I hadn’t even planned to visit, but have since come to love exploring.

We ended up at the gateway to the lake after a particularly successful hitchhike, then climbed into a 50 RMB minibus bound for the lake.  The driver was part of the minority village tribe that lives around Lugu Lake.  He offered to get us a “special discount” on the park entrance in exchange for 50 yuan, about half the price of the standard entrance ticket.

“I’m a tour guide, so I don’t have to pay” said Ya Ting, fudging the truth a bit since she did have a tour guide badge but had quit that job months ago.

His face fell and silence passed for ten minutes before he retorted, “then just give me 20, less than half the student price!”

I hesitantly agreed, unsure of how he procured this special discount, upon which he abruptly stopped the car and ordered a changing of seats.  I couldn’t quite understand what he was saying, other than making out “girlfriend,” as he put me in front.

We pulled up to the park entrance while the attendants looked in the car and, satisfied that we were all locals, waved us through, until spotting me front and center.  The attendant began to approach the car, pointing directly at me, when the driver suddenly put the gas pedal to the floor and sped through, laughing like a puckish child, while the attendant shouted wildly behind us.

I realized that the “discount” he provided was really a tip for driving right through the entrance without paying the fee.  He thought if I appeared to be his girlfriend perhaps they’d let me through gratis (though clearly his half-witted plan didn’t work).  I happily handed over the 20 once we reached Lugu Lake, fully respecting the hustle.

The thing to do in Lugu Lake is to cycle around it, a hilly route that spans 74 kilometers.  The bikes run at a rental fee of about USD $5 per day.

I hadn’t really known what to expect of the lake, given I blindly followed Ya Ting there, but was very glad to see that it was a beautiful hue of blue, and even reminded me a bit of  New Zealand:

Lugu Lake is a sacred place, known as women’s country to commemorate a time when women were the head of the household in the area.

It just so happened that we were also there on International Women’s Day, what are the odds?

Unfortunately, given our late start and regular breaks, the sun showed signs of going down and we had to stop our forward progress for the night in one of the small towns along the way.

I do believe it could have been biked in one day if I had been solo and started earlier.  I didn’t need the frequent breaks but didn’t want to leave my friends behind, and often found myself waiting for 20-30 minutes at a time, taking photos, while waiting for them to catch up.

Poor Ya Ting, she even fell and took a tumble, scraping her arm and back, on one of the downhills.  After that, I couldn’t be frustrated that we didn’t make it the whole way around.  After all, she knew a hotel owner who let us stay the night for free.

Besides, it was the perfect part of the lake for a beautiful sunrise viewing. 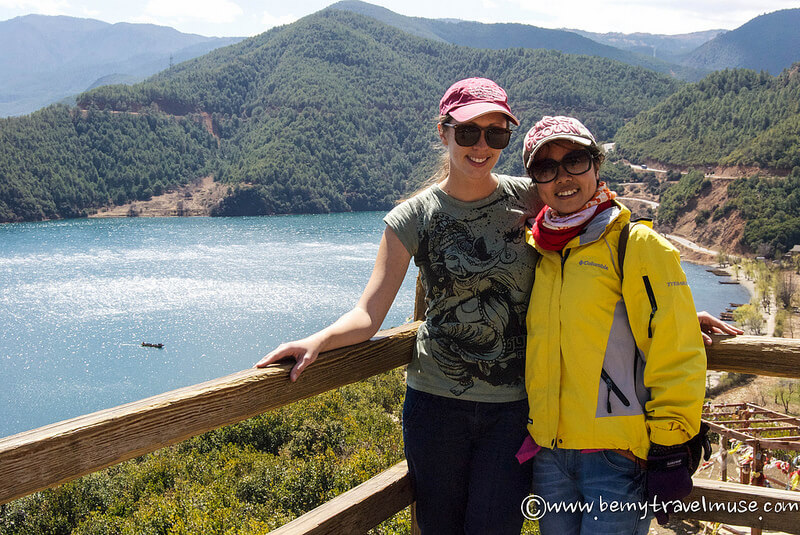