They didn’t say it would be the most amazing sunrise view in all of Sri Lanka, or perhaps all of Asia, or dare I say, the world.

Okay maybe not the world but it was definitely in my top 5.

I have a thing for climbing and hiking, especially for a sunrise.  It’s what my family always did together and there’s nothing like the view at the top of a strenuous hike to provide the perfect reward for all that hard work – not to mention you can totally have chocolate milk after.  I mean you’ve earned it, amiright or amiright?

Adam’s Peak (or Sri Prada) is so-named because it is believed that Adam’s footprint rests at the top, if you ask a Musilm or Christian, that is.  If you ask a Buddhist, it is most certainly the Buddha’s footprint, and if you ask a Hindu, it belongs to Shiva.

Either way, it has become a significant pilgrimage place for several faiths, resulting in large numbers of locals making the more than 5,000-stair climb to the peak at 2,243 meters (7,359 feet) over 5 kilometers (3-ish miles) during the months of December to May along a well-lit path.

I elected to go the week right before the pilgrimage season began, which ended up being the best idea ever.

The pathways were not lit during this time, so I brought a headlamp along so as not to stumble and fall, which I am prone to do.

During the peak pilgrimage season, hundreds if not thousands of people flock to Adam’s Peak each day for the sunrise, making it a crowded climb. When I went, there were only about 50 people at the top, which even at this lower number was probably the max that the peak could comfortably accommodate.

Hiking up with the stars (shutting off my headlamp every now and then and just sitting and admiring), not worrying about anyone else passing by, and happily not missing out on The Milky Way that would be shut out by lighting, was perfect to me.

I had read various forums saying that it would be unsafe to try the climb during the off-season, or that it was closed.  I’m happy to report this is untrue and I’d urge anyone who wants to try it, as long as it’s not raining (because that would make it quite unpleasant and muddy), to give it a shot.

Yes, it’s a bit of a challenge to climb up 5,000+ stairs, but it’s well worth it. Even the red-faced couple I ran into about a half hour from the top, worried they wouldn’t make it, arrived in plenty of time to see the sunrise.

And my, what a truly marvelous sunrise it was.

The walk down, given all those stairs, was a challenge for the knees, but on the high of the sunrise, I barely felt it.  Once I was done with the steep stairs, I leaped, ran, and bounded the rest of the way down.  Total time was about 6 hours – 4 of which were spent climbing, 2 of which were spent waiting for and then admiring the sunrise.

READ NEXT: The Cost of Travel in Sri Lanka 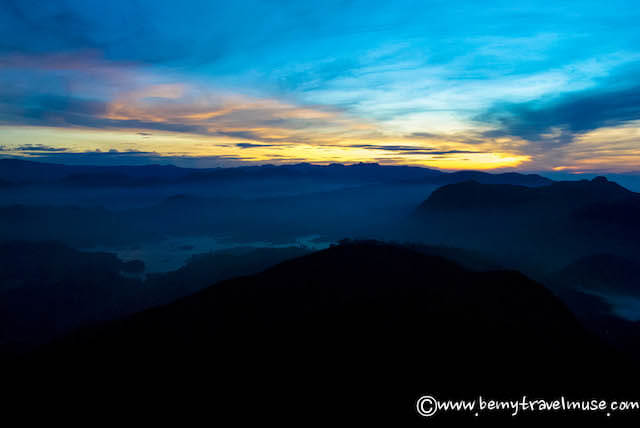 119 shares
« A Visual Tour of Sri Lanka’s Cultural Triangle
Is Now a Good Time to Travel in The Philippines? »