Thank you for lighting a fire under me, because that just pushed me to prove that there are still PLENTY of places in Southeast Asia that have yet to be discovered by the typical tourist.

I sat at a hostel in Nha Trang poring over a map of Vietnam, a little disgusted with the town and very much ready to be somewhere where tourists didn’t outnumber jaded locals.  All of the other travelers seemed to be heading straight to Hoi An from there, but I figured there just had to be more to see between the large space between the two towns.

Enter Yok Don National Park in the central highlands where I was the first tourist they had seen in a month.

At first I thought the park ranger was using a bit of hyperbole, until the Australian volunteer, Cherie, who had been living there for the past six months, confirmed this was the case.

Yok Don National Park is a deciduous forest and the largest national park in Vietnam, with parts of it sitting along the Cambodian border.

I fully expected to see sprawling jungle and was surprised when I found a dry forest in the midst of losing its leaves.

Yok Don used to be famous for a wealth of animals living in the forest.  Quite unfortunately, once natives were moved off of their lands in order for the park to be created, they turned to poaching and pretty much emptied the park of its crocodiles, tigers, and wild elephants.

Now most of the elephants have been domesticated, over 300 of which were trained by a single man, famous in the area, who lived to be 113 years young.

Most of the tourism here revolves around these elephants and trekking.  There are a few different options which range from riding the elephants to “finding” the elephant, which involves walking through the forest with the elephant’s trainer while he uses various tricks and techniques to locate his elephant. The elephants are allowed to roam from time to time, but still with chains around their feet as they might otherwise roam too far – right into a farm where they tend to destroy farmer’s crops.

A few Brits who showed up on motorbikes around the same time (we somehow all ended up there at once!) did an elephant trek and enjoyed it quite a bit.

I can certainly understand the appeal of riding on, washing, playing with, and petting domesticated elephants, but given my ethical opposition, I went on a forest walk instead, not pushing my opinion on anyone but sticking to my own moral high ground.

I felt it was a bit short and uneventful given the cost ($20), which is, unfortunately, unavoidable as any excursion into the park must be accompanied by a guide as mandated by law.  It’s possible the longer, overnight treks are more rewarding.

The real highlight of being at the park was simply to laze on the banks of the river, going swimming, laying in hammocks, attempting to fish, and chatting with the others who were there – just the few of us, never another tourist in sight.

I also learned more about Vietnam (or that part of it, at least) than I ever otherwise would have.

The majority of people in that area are unemployed, and it’s much easier to log in the forest or sell an animal pelt than to struggle by other means. I also learned that the food and drink vendors don’t actually make any profit unless foreigners come into town, in which case they do charge us a bit more.  Otherwise, they are just breaking even.

I bet the people who think they’re getting scammed in Vietnam don’t realize that.

I found that a little shocking. Why wouldn’t they want to make a profit? I couldn’t wrap my mind around it but I’m from a capitalist background and Vietnam is a communist country.  I almost didn’t mind paying the mere 2000 dong more per meal or beer that they were charging me with that knowledge in mind.  They should make a living, I reasoned.

The national park itself barely breaks even, and is funded by the government. The guesthouse there opened just three months ago (previously lodging was at the ranger stations), and a push for tourism is just beginning, thanks in part to Cherie’s efforts. With any luck this will result in more cash in the area and more opportunity to protect the park as locals see that they can make a living by means other than poaching.

That night we built a bonfire on the banks of the river, roasted choco pies (chocolate covered cakes with marshmallow in the middle), sang a capella karaoke and generally enjoyed each other’s company.  I was glad that we had all arrived at that time to hang with Cherie – it was Australia Day, after all.

I left very happy to have found a place that others don’t normally visit, with a few new friends, wonderful memories, and bonfire smell-infused hair. 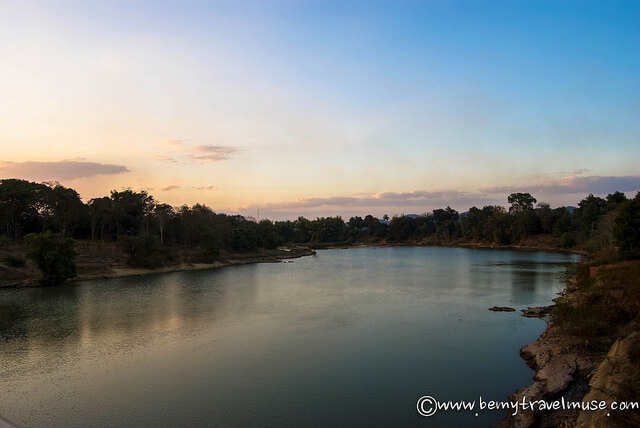 7 shares
« A Lot to Love about Da Lat, Vietnam
No Wonder Hoi An is So Loved »