A friend of mine in Bologna asked me if I planned to do a via ferrata while I was visiting South Tyrol, Italy in the following days. He said it was the thing to do while in the area, so I said, “in that case, yes.”

I made the plan without any idea of what a via ferrata is, of course.

It turns out I have a habit of accidentally rock climbing. This is now the second time.

First if all, I visited South Tyrol because friends had told me it is beautiful. I pretty much go where people with a similar travel style to mine say is awesome, because they’re usually right.  South Tyrol was no exception.

What was really quite amazing was being there in the autumn. I haven’t experienced changing leaves since I was almost too young to remember – seriously!  So being somewhere going through the harvest season and seeing such gorgeous changing colors was really spectacular.

This was mid-October, and to me, the perfect time to check out South Tyrol because it lands between the influx of tourists in the summer and winter months for hiking and skiing, respectively.

This is the Alpine region of Italy – which is something I think many travelers who visit the area probably don’t picture when they think of Italy.

Maybe famous monuments, churches, beaches, or amazing Italian food come to mind, but do you think of alpine villages, hearing the German and Ladin* languages around you, and eating wurst while in Italy? I know I didn’t before visiting.

*A word on Ladin – it’s a language preserved in this region by parents passing onto their young. The dialect changes from valley to valley and as few as 1000 people might speak a particular dialect of Ladin. In school, children begin to learn German, Italian, and also English.

There is one big reason why most people visit South Tyrol – the Dolomites, a rock formation which has been named a UNESCO World Heritage Site.

Now I’ve been to a lot of UNESCO sites in my travels, and I usually kind of hate visiting them because the tourism numbers the distinction brings with it usually tend to ruin the place for me. That said, arriving during a shoulder season definitely helped to curb that. It didn’t feel crowded viewing them, and same goes for climbing them.

Seeing and climbing the Dolomites ended up being one of the biggest highlights of visiting the region, also famous for its wine, apples, and Thanksgiving feasting (but more on that later).

It turns out that via ferrata is a fixed-route climb equipped with cables and ladders.

One straps him or herself in to climb up and often rappels down, and, though my running shoes were not ideal for that type of climb (though I have a habit of wearing running shoes in situations they are unhelpful in, like that time I climbed in the snow in Nepal for two weeks in a pair with a hole in them), I was excited to give it a try.

I was also characteristically unprepared weather-wise, and my amazing guide grabbed a jacket and sweater from his own closet for me to borrow – Italian hospitality.

As we drove down winding mountain roads from Ortisei – a small town in South Tyrol, to the start of the trek my guide, Gregor, excitedly told me about his climbs he had done in the ’70s with friends in California. It was our common ground.

He turned on the radio so that I could hear the sound of Ladin changing as we went from valley to valley . I always find language offers a pretty cool insight into the local culture in the way that things are said and the fact that this language has been so carefully preserved is testament to the truly unique culture here.

Gregor is super cool. He is like a hybrid tour guide, certified rock and ice climbing badass, and pro photographer in one. He made sure to get some really awesome shots of me climbing throughout the day, which I am grateful for because I’m terrible about asking people to take my photo for me.

The climb itself was really fun, and not too difficult. Surely it varies based on your fitness, experience, and perhaps shoe-appropriateness level, but it seems you never can truly run out of via ferratas to try.

Gregor said he has only repeated three all year and has discovered and named several (adorably, after his children) over the last decade or so.

Regardless of which you do, my guess is the view is sure to be spectacular.

If you’re lucky, even if you’re taking this trek solo like I did, you’ll end up with a brilliant photographer who doubles as a guide as well.

South Tyrol really impressed me with its beauty, interesting culture, and warm people. I’d love to return one day.

Do you like climbing and hiking as well? Where are your favorite spots?

*Disclosure: This post was brought to you in collaboration with South Tyrol’s tourism board. All opinions, including being quite stoked to rock climb on accident again, are my own. 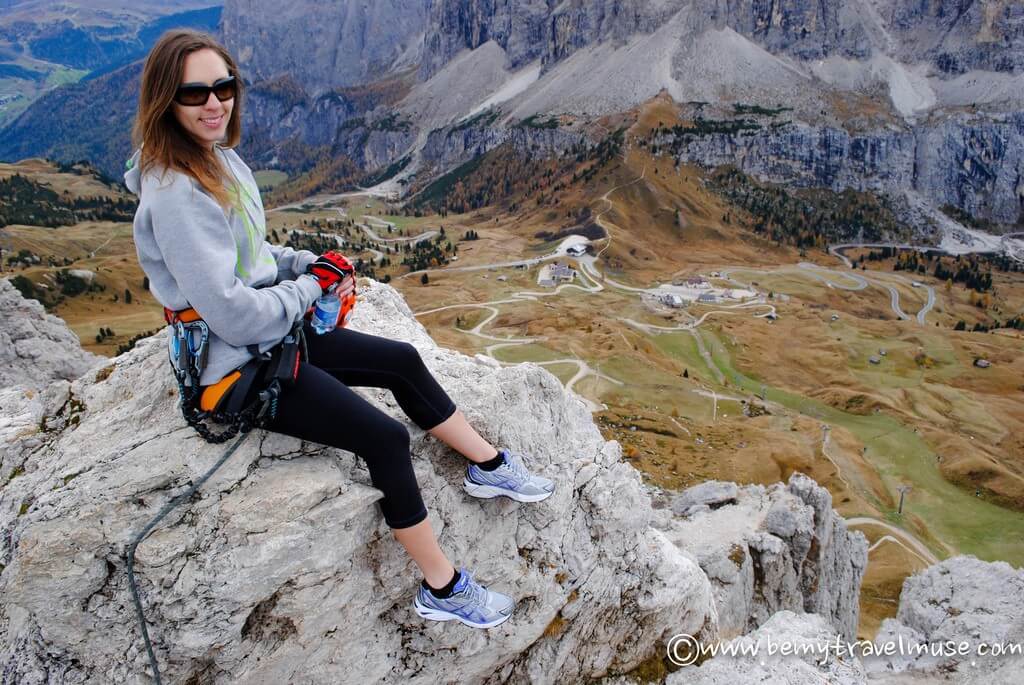