I remember the Island of the Blue Dolphins from when I was a child.  It was about a young girl who was stranded on San Nicholas island off the coast of California for 18 years (true story). She forms a close bond with the animals on the island, and builds herself a house of whale bones.

I traveled to San Nicholas during my university years in Santa Barbara, and imagined what life must have been like for her.  The island was gorgeous, framed by deep blue water and the rich marine life of the California coast.  Yesterday, the same thoughts came flooding back as I watched dolphins jump out of the waves in the Bay of Islands in New Zealand – a place I may somehow love even more.

Yesterday, it was the same girl standing on the edge of a ship, always at the front, for love of the spray of the waves and the dancing movement they impart on the vessel, as the one who gazed upon the island in wonderment during her younger years. Seven years later, she found herself face to face, once again with bottlenose dolphins, thinking just what she’d say when she wrote this blog.

Only to realize that the photos really speak for themselves:

Only this wasn’t just one island, it was an entire bay full of islands, surrounded by water that was a color unlike any I had ever seen. Really!

My absolute favorite came at the end of the trip – the Hole in the Rock.

Schools of shining bluefish cascaded through the waves near the mouth of the Hole, as powerful waves came crashing through, creating layer upon layer of blues that went from a dark sapphire color to a glowing light blue. 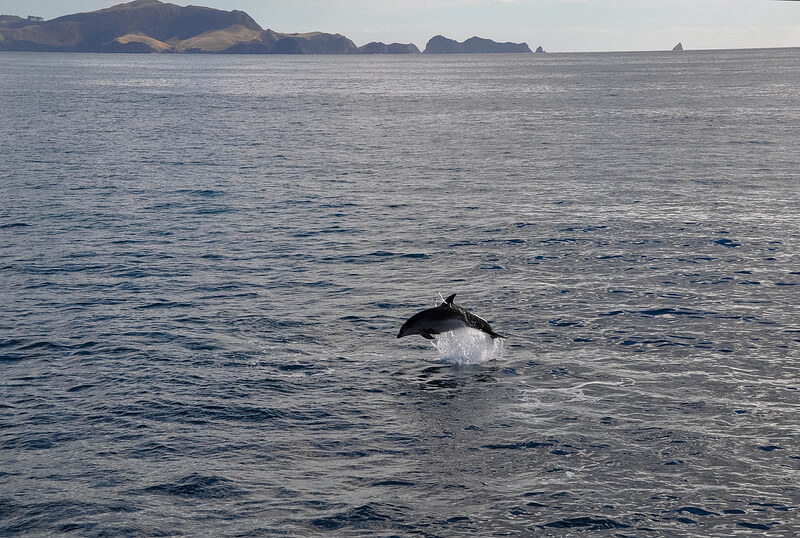 99 shares
« I Made a Mistake: I Followed My Heart
New Zealand is Blue, and I Mean that in the Best Possible Way »