As this post goes live I’m sitting on a bus from Johannesburg bound for Maputo, the capital of Mozambique. If I’m honest, I’m kind of terrified.

I keep telling myself it will be fine but honestly, I have no idea what lies ahead of me.

I woke up to a strange message a week and a half ago, “I can’t go with you,” it said, “A woman came floating outta nowhere and stole my heart.”

It didn’t come as a massive surprise. J and I had always had one of those connections that you could just feel down to your very core. He constantly referred to it as ‘energy’ and I couldn’t argue – that’s exactly what it felt like. There was a magnetic pull that I resisted intently at first, but eventually couldn’t ignore. I didn’t want another impossible romance, but thought maybe this time, I can just enjoy the moment, so that’s what I did.

I left swearing I would just let it be where it was, beautiful and sweet, but too short.

Except we were both very bad at leaving it where it was. We kept in contact. There were times I tried to pull away but he pulled me back in. I told myself just to be casual about it. To just see where it might lead, whether that was somewhere or nowhere.

J always spoke of the amazingness of Mozambique – the intensely blue water, the gorgeous landscape, and the laid back vibe. Other South Africans I spoke with echoed his words. They all took on the same tone of voice, stars in their eyes, and their words elongated when they spoke of its beauty.

“Moooozambique!” They would say, entranced.

After months of waffling back and forth, I decided I owed it to myself to give it a try – not J, necessarily, but the place and the adventure. Whatever may or may not happen with us was just a bonus if not a big question mark.

He promised we’d go together no-matter what. It seemed perfect.

Except I started to feel a disconnect in the days before his message came through. It’s like the wavelengths, without any sign of weakening or gradually tapering off, just stopped cold. I was ready for the news to come, I could feel it. This is the story of my life, after all.

How could I be mad at him? We hadn’t seen each other in months, and it’s not like I loved the guy. Between me and someone who is there, standing in front of him, it’s no real contest. I would have made the same choice.

He continued that he’d wrestled with the guilt for the whole two weeks he’d known her (love? That soon? Hm, OK), and offered that the three of us could go together! Why not, right? Three peas in a pod.

I didn’t have to think about that one for too long. I told him I wished him well, but three’s a crowd, and I’d be going this one alone.

Besides, I wasn’t going back to Africa for anyone but me.

After the disappointment subsided over the next ten hours, surprised that was all it took, an unwelcome feeling started to creep in and replace it: dread.

J is a 6’4 South African guy who used to live in Mozambique. I was happy to tag along. I liked the idea of traveling with someone else for once, especially someone with whom I got along so easily and who really knew the country well. We’d had such awesome-sounding plans and I was pretty excited.

But those are gone with the wind now.

Now I have to start from square one.

This isn’t a pity party. There are worse things in life than having to travel somewhere beautiful alone, I know.

Southeast Asia wasn’t uncharted territory, and Europe is hardly intimidating. I knew of plenty of women who had traveled to those places on their own. I couldn’t actually think of anywhere, save for a couple of specific places, I’d been to in the past that hadn’t been traveled by someone I knew or at least knew of.

However I’m not going to shy away and cancel my plans. Not because of some dude. No way. I’ve been saying lately in my newsletters that I haven’t done anything that made me feel badass lately, and maybe this is just what the doctor ordered. Maybe it’s exactly what I need to do to feel inspired and challenged again.

I haven’t been able to find much of anything written by a solo female traveler who went to Mozambique.

So I guess it’s time that someone went there and wrote something.

I guess that someone is me.

READ NEXT: My Thoughts on traveling alone in Mozambique after arriving *Spoiler alert* I thought it was awesome! 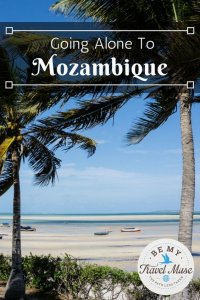 4 shares
« When You Were A Child, What Did You Dream You’d Become?
Magical Iceland: How It Looks to Set Foot in Narnia »