I pulled into Slab City, a squatter community in California, at around midnight. I wasn’t entirely comfortable with camping overnight, to be honest. How had I ended up there, of all places?

Rewind an hour, I’d stopped for gas well after sundown towards the end of my 10-hour drive down from the top of Arizona to Slab City, and walked in to speak to the attendant.

“Pardon me for asking this, but is there anywhere with cheaper gas around here?”

The friendly attendant, a talkative man in his mid-50s, agreed it was overpriced and said it wouldn’t get any cheaper as I headed farther away from civilization.

“Lots of folks around here who have fallen on hard times are considering moving to Slab City,” he added.

“Oh, I thought it was just the Salvation Mountain art installation out there. There’s a town too? ” I asked.

He gave me a little grin and said, “It’s the last free place in America.”

I was on my way to see Salvation Mountain. It’s all I knew was out there. It’s the main attraction for most visitors to Slab City, and I had wanted to see it for years but never really had a reason to go all the way over to Imperial County, located almost 200 miles southeast of Los Angeles.

Which is about 100 miles past nowhere, to be exact.

I would come to find that Slab City is a community of the misunderstood and the outcasts using what’s been left behind and rejected by others to create a free society that operates nearly independently of the rest of the world. 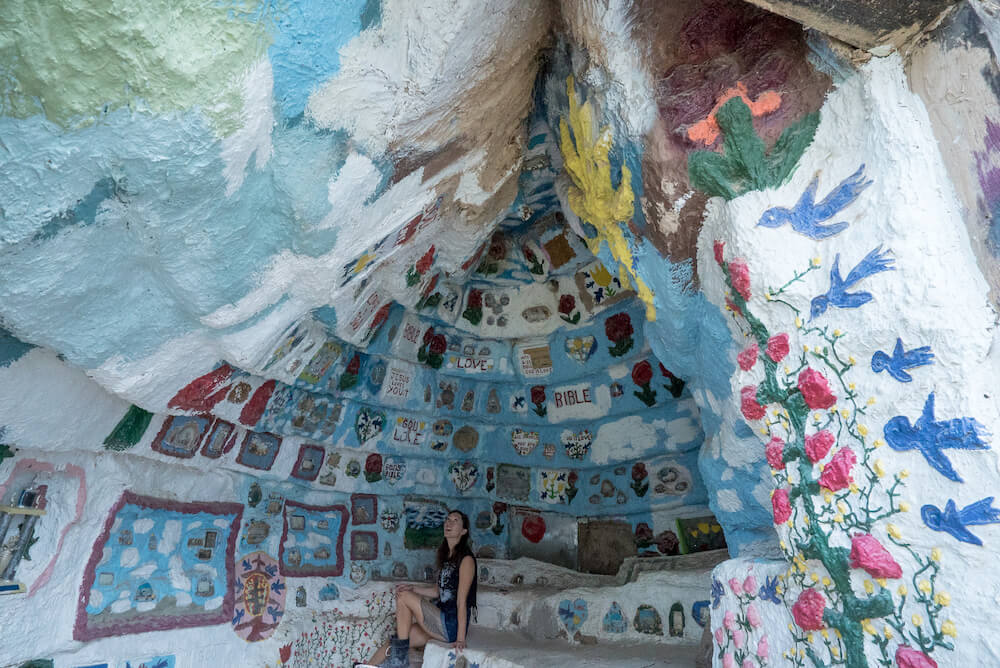 I pulled into a pitch black Slab City and turned off my high beams. The tar road turned to dirt and after a few minutes I pulled off into the spot I’d found on the free camping website.

I had spent the entire week prior to arriving in Slab City free camping in Utah’s public lands but this felt different. This felt disquieting. 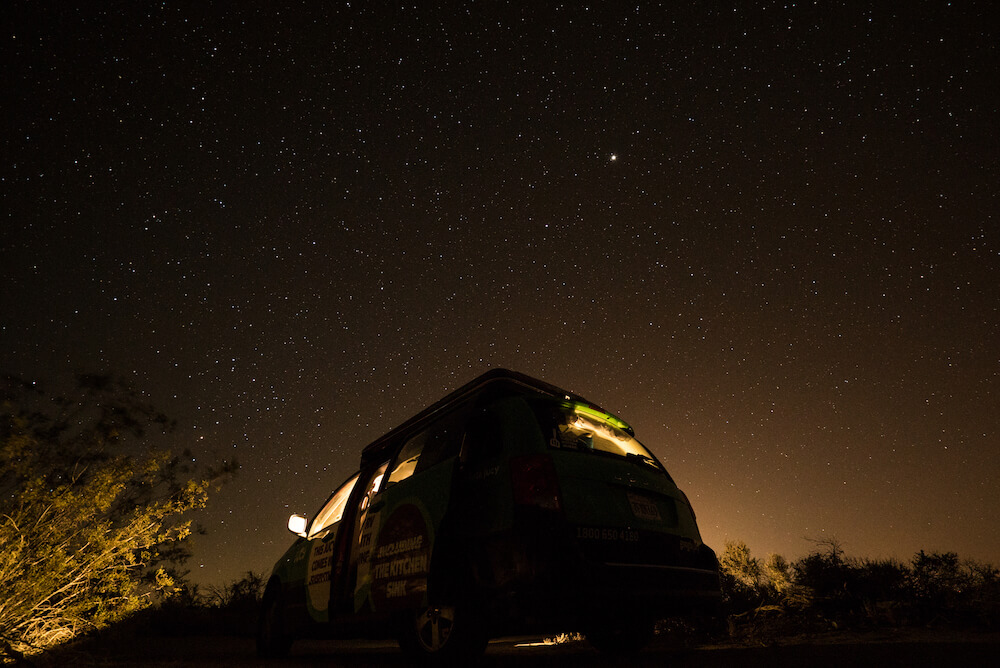 The next morning I awoke at the crack of dawn. After a restless sleep I headed back down the dirt road to Salvation Mountain. I wanted to see it without anyone else around!

The oppressive sun, already radiating down an incredible amount of heat at 5am, beamed down that day with a vengeance. The land is dry, barren, and scorching.

I pulled up to Salvation Mountain and felt as though I’d walked into the Candy Land board game.

Salvation Mountain was created by US Army veteran Leonard Knight using sand, junkyard items, wood, and old tires he scavenged from the surrounding area. He built it using Navajo building methods with adobe, sticks and lead-free paint. It features the sinner’s prayer front and center, which was Knight’s inspiration.

His devotion to Christianity happened later in his life, at around age 35 when one day he had an epiphany while repeating the sinner’s prayer. To him it was simple; accept Jesus into your heart, repent your sins, and be saved. He spent many years after that trying to spread the message and while various churches rejected him. They said that he was oversimplifying things.

His first artistic attempt to spread his ideas was a hot air balloon, but after several attempts to take flight, he admitted defeat and got to work on what would be his life’s greatest creation, and the project that he would finish out his days on: Salvation Mountain.

It is clear everywhere you look that his enthusiasm and dedication never waned.

This isn’t just for Christians, though. The artistic style is something that I think anyone could find appealing.

For me, it’s like visiting La Sagrada Familia in Barcelona or the White Temple in Thailand. Acts of devotion like this are moving and I love the modern art twist.

Knight passed away in 2014, but his work remains very much alive and is maintained by donations.

It has won numerous awards and was named a ‘national treasure’ by Senator Barbara Boxer.

After wandering I settled in for some morning coffee at the back of my van. Maybe I’d been hasty to mistrust Slab City.

The next instant, a mostly toothless man in his 50s came running wildly toward me, mumbling. I thought at first that he was looking for someone, and then it dawned on me that he’d asked for water. I handed over a bottle and he ran away again, just as haphazardly and abruptly as he came.

So I actually had entered a new dimension, right?

Then I certainly couldn’t leave yet.

I started driving around Slab City and filming some of the other of the places I saw. That’s when I met Karibe.

A gregarious fellow, Karibe has lived in Slab City for two years and in that time built a little oasis on a slab with upcycled items and solar panels. He saw me filming and wondered if I wanted to see his place.

A small voice in the back of my head begged, ‘is this really a good idea?’ as I heard myself say “yes.”

Karibe gave away very little about himself but told me a lot about the community.

Slab City got its name because of the concrete slabs left behind by the US military which used it as a base in the 1940s.

Roughly 150 people live there year-round, some of whom have been there for over 30 years. Plenty more, like yours truly, come and camp for free, and many snowbirds live there during the cooler months and then head north around March. I can’t blame them – in the summer temperatures can reach over 120°F (48°C)!

This isn’t just a squatter community, Slab City is a place for people to create art, to live off the grid, to be de facto anarchists, or simply to have a place to go when the cash flow runs dry. The place has a life and personality of its own.

He says that a lot of the people there are ex-military, worked in public service somehow and now live on social security, or are young people who don’t want to be a part of mainstream society anymore.

While I’ve seen plenty of squatter communities around the world, Slab City is a beast all its own with a hostel (its tagline is, “the greatest place on earth”), library, skate park, live music on Saturday nights, and even a bowling alley.

Just about every semi permanent settlement is decorated. Take one of the more famous ones, East Jesus, for example. It’s a junkyard wonderland that feels a little bit like stepping into a world where Mad Max meets MOMA.

In a lot of ways Slab City reminds me of Burning Man, except this has an uneasy, more sinister feel. It’s a community built on trust and codependence as much as it is a place that attracts fugitives, addicts, and freeloaders.

How do they survive? Thanks to the plentiful sun, they have an endless supply of electricity thanks to solar panels, and water, which according to Karibe, gets delivered. Some people survive on social security and others hope that tourists will buy their wares or make donations.

I’m left unable to really define slab city. Perhaps that is the idea.

It’s a haven for those living on the fringe of society, taking up residence in land that nobody else wants, and living a life in opposition to the norm.

So, at least for now, Slab City remains the last free place in America.

749 shares
« How to See White Pocket, an Amazing Alternative to the Wave
Solo Female Travel Stories: Roberta from Italy »