For most visitors to Patagonia, the itinerary might include Bariloche in Argentina, where I started out, and a long and boring bus ride down Ruta 40 to southern Patagonia, bypassing most of the Chilean side.

That bus ride takes about 25 hours and routes through rural Pampa lands with views of short yellow shrubs and cattle.

The alternative is to travel along the Carretera Austral, or Ruta 7, in Chile. Since the road is mostly just gravel and busses are intermittent at best, to do it right takes about two weeks and unless you take a car down the road, you’re hitchhiking.

Construction of the Carretera Austral highway began in 1976. Then-dictator Augusto Pinochet ordered the Chilean Army to build the road in order to connect remote communities that were difficult to reach by land. More than 10,000 soldiers were sent to work in its construction, many of whom lost their lives during their effort.

The highway opened to traffic in 1988, and has been under construction ever since. Some parts are paved but much of the road is still gravel.

What I loved about the Carretera Austral was the lack of foreign tourists. There were a few, but the route is much more famous and popular with young Chilenos who try to get as far as they can go by the grace of strangers over the course of their summer holidays. For many of them, it’s a pilgrimage that defines their youth.

For me, it would define my time in Patagonia and my impression of Chilean people.

The first time I tried hitchhiking in Costa Rica, I was scared shitless and worried I’d made a huge mistake, but all turned out well and I felt a warmth in me I’d never felt before when I alighted from the car. There’s something so humbling and reassuring about hitchhiking.

I know that if you’ve never done it before this might sound absolutely crazy, but there is nothing I can think of that has let me into the culture or made me feel as confident in the goodness of people as much as me openly asking for help on the side of the road and a perfect stranger making the snap decision to give it.

South America is the fifth continent I’ve hitchhiked on. In Asia, I went through two provinces in China almost exclusively using my thumb, and in Mozambique in Africa it was one of the safer ways to get around, believe it or not.

I embarked on this journey of two weeks and roughly 1000 kilometers (≈621 miles) with Steve who had already done it once in the reverse from south to north three years prior. This time, he returned with the goal of making a documentary out of the experience, and I had a goal of seeing as much of beautiful Patagonia as possible.

Between the two of us, I estimated that we had roughly $10,000 worth of equipment including two computers, two brand new cameras, GoPros, a drone, and basically our whole lives packed into two big backpacks and two small ones. I’ve always viewed hitchhiking as a way of displaying one’s blind trust in the goodness of humanity and in turn another test of people’s goodness. Why did we risk it? Because that was the entire point.

We started with a few bus rides and ferry combinations from Bariloche to Puerto Montt in Chile. We boarded an early morning bus from there to Chaitén, a town that was mostly destroyed by a volcanic eruption in 2008. While everyone survived, as the town was evacuated in time, the evidence is still everywhere from the beach covered in volcanic ash to the houses still partially buried by the mud and debris.

However, it was peaceful and quiet in a way that would come to define the entire Carretera Austral, a road connecting tiny villages, simple homes, welcoming and curious people, and the least-known parts of Patagonia and South America in general.

Standing on the road outside of town the next morning, it didn’t take long for the first ride to come. It was a local restaurant owner named Christian who was on his way to Futaleufú, a rafting town a few hours off of the Carretera Austral. He was a young man of few words but with a handsome smile and a love for top 40 music. He dropped us at the junction between his turnoff and ours, and immediately my heart sank.

“Uh oh, competition,” Steve said as we surveyed the situation. There were already tons of hitchhikers on the road.

On the north end of the Carretera Austral, you tend to see a lot of Chilenos, mainly from Santiago, starting out the trip, and as you get farther south and even more rural, the numbers drop as they run out of time and have to return home. This part was the most crowded we would encounter.

We walked several hundred meters to what looked like no man’s land. There was a tiny town nearby for snacks and food, but otherwise, it was just a hot day with low prospects as car after car sped by us. I didn’t want to keep going. I wished so hard that day that there was a reliable way to go by bus.

When lunchtime rolled around, I went to town to search out a place to eat. I looked around and saw tons more groups than there were before. They had just filled in spots along the road, and we had been sitting like fools at the very end. We waited for 8 hours that day for a ride. As night was falling most of the others gave up. A bus that was too full to stop sped on by, as happened often on that route, the driver shrugging in apology. Steve and I figured we’d give it ten more minutes before setting up the tent and calling the day a loss.

Just then a car came by with only two spots in the back. He passed a group of three ahead of us, and I held up two fingers anxiously. He returned the peace-sign two and pulled over just as night was falling.

It was an incredibly long day, but in the end, a successful one. All of the frustration and disappointment faded and was replaced with joy and excitement because we had made it a few more hours down the road.

It was the beginning of one of the craziest travel stories of my life. I could never have imagined the ridiculousness that would come in the following days. It would be my most incredible hitchhike yet.

If you want a little peek into how that day and the following ones were, here’s another episode of the video series we were there to put together. I hope you enjoy it! 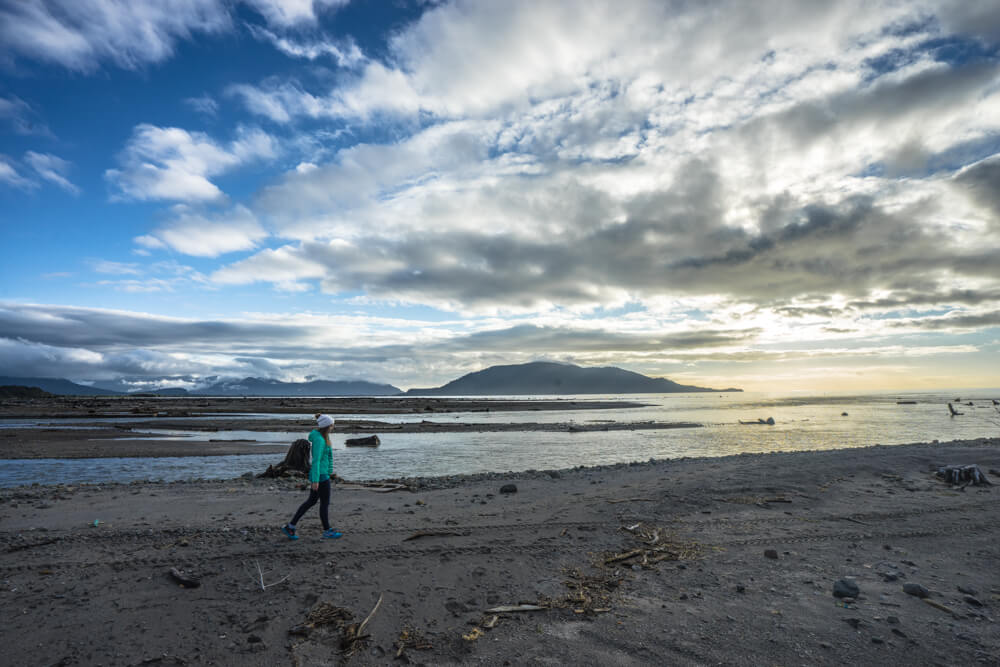 4 shares
« The Worst Thing About Getting Robbed
Dear Millennials: You Already Have the Answer »