When the sun sets in the Atacama Desert, one of nature’s most impressive shows begins. The arid, yellow, salty sand changes from shades of white to gold, and the wispy clouds swirl in divine motion, turning from orange, to pink, and finally purple. 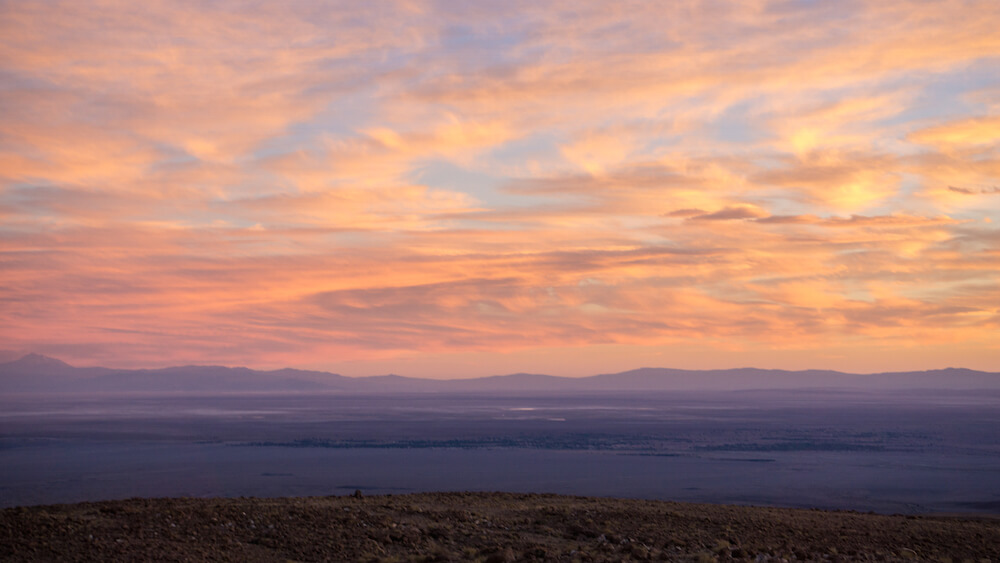 As the moon sets, drawing the rest of the light down with it, the real star comes on stage – or should I say stars – as the milky way comes into crystal clear view.

The San Pedro de Atacama Desert is said to be the best place on earth for star-gazing thanks to the low amount of light pollution and the dryness. It’s actually the driest desert on earth, and some parts of the desert haven’t even had rain since record keeping began.

Plus, stargazing in the Southern Hemisphere gives you access to constellations that are better than those in the north, if you trust an astronomer’s opinion, that is.

What makes the San Pedro de Atacama Desert so dry? It’s one of few places in the world that experiences what’s called the “rainshadow effect,” which means that the Andes mountain range blocks the rain from getting to the desert.

When the rain clouds come in from the east, the air cools as it rises up over the mountains, turning into snow before it can go farther west. By the time the air reaches the desert, it’s hot and dry.

We can also thank the coastal Humboldt Current for making the Atacama Desert so dry and the sky so clear and cloudless.

It’s a cold front that flows north along the coast. Onshore winds turn cold when crossing this current, creating dry and cloudless air that flows to the Atacama Desert. 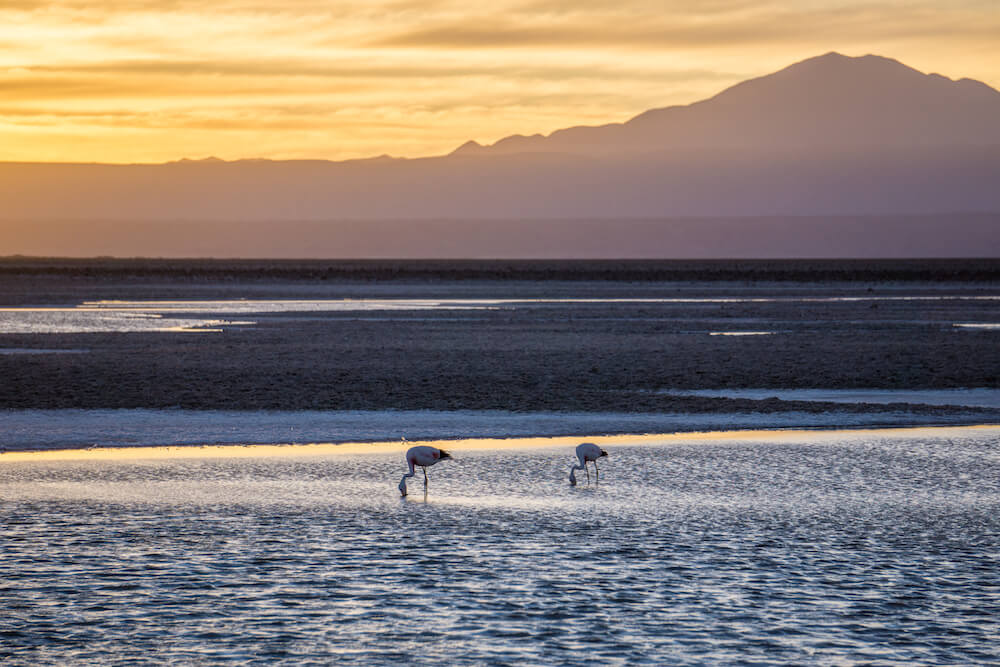 I couldn’t help but wonder, on the driest desert on earth, how could there be any life?

But mother nature always finds a way to strike a harmonious balance, and thanks to the salty waters full of algea and crustaceans, the Andean, James’s, and Chilean flamingos are all found in the Atacama Desert.

They’re not the only ones that manage to survive here, though. 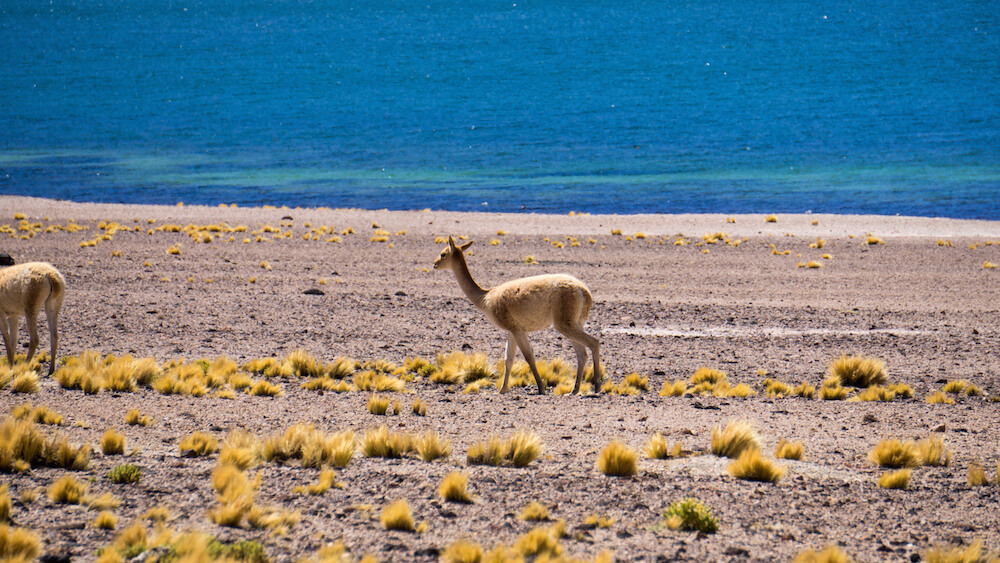 Alpaca, Guanaco, and the smaller vicuña (pictured above) reside in the altiplano or Andean Plateau of the Atacama Desert. When you do find yourself here, you’re sure to see a few as you explore the wide open spaces, particularly the higher in elevation you go.

You’ll find more vicuña than alpaca, as they require less water due to their smaller size. These cute, furry creatures gather in small groups in the areas of the desert that have more vegetation, like the salt flats. They also tend to roam in packs.

I remember seeing the Guanaco in Torres del Paine in Patagonia as well. How crazy it is that animals like this could survive in such extremely different places, with environments that seem to be so opposite from each other. 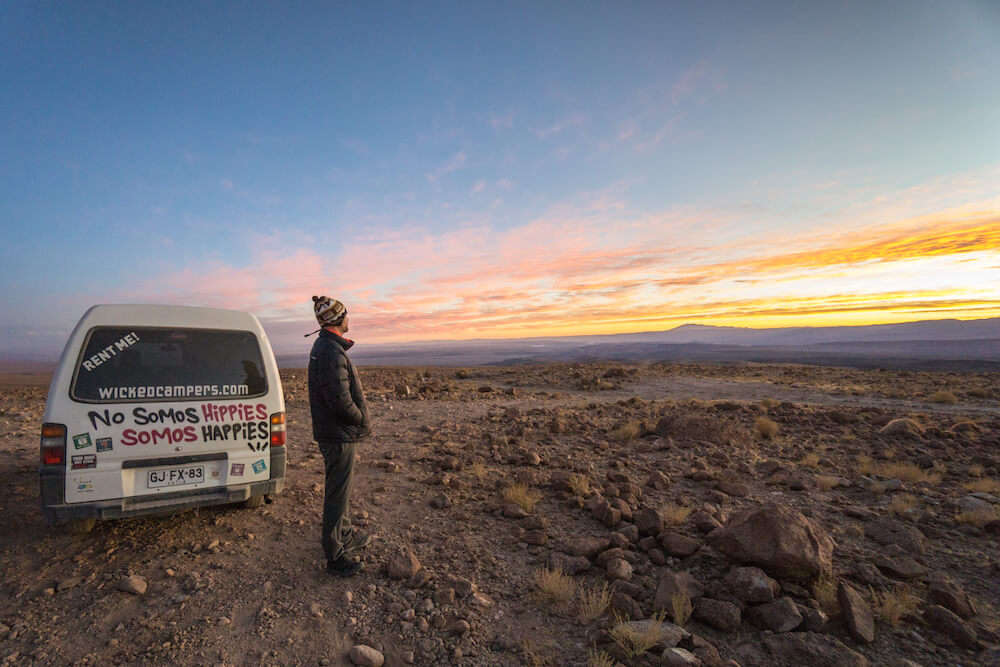 Believe it or not, people live here year-round, too.

Though most of the people living in the Atacama Desert area live in the coastal towns such as Antofogasta and Mejillones, there are oases like Calama and San Pedro de Atacama where they live as well. As a tourist in the region, chances are good that you’d fly into Calama and make the town of San Pedro your base.

Apart from tourism, mining areas rich in copper, silver, and gold are what attract people to the area. Small springs of water have also drawn local minority groups for centuries. What a testament to human ingenuity and perseverance! 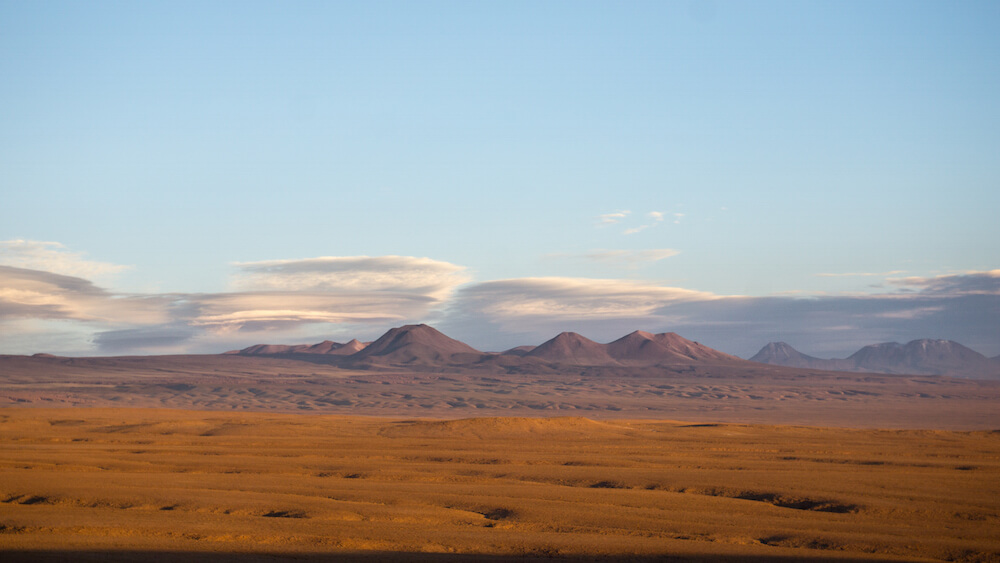 It may not be a tropical beach, and it certainly isn’t a quaint little European village, but there’s something about deserts — so rough, vast, and inhospitable — that reminds me that I’m alive.

Though dry and harsh, this is what earns you a chance to see the clearest sky on earth even though the landscape feels more like the moon.

This is the San Pedro de Atacama Desert in Chile, and there’s nowhere else in the world like it. 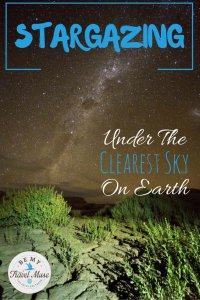 7 shares
« Filipino Food: All the Best Noms from Breakfast to Dinner
The Best of Camping in the San Pedro de Atacama Desert, Chile »