Call me crazy, but I really didn’t think of safaris when I thought of Sri Lanka.

Well, to be honest, I had no idea whatsoever to think of when I thought of Sri Lanka.  It was the layover on my trip back from the Maldives so I just stayed and checked it out for a while.

The end result was falling in love with an astoundingly gorgeous country with some of the more friendly people I’ve ever encountered.

One of the most amazing things about this place is the endless jungle.  It stretches for miles and miles in every which direction, as far as the eye can see.

Therein dwell all kinds of amazing creatures, the most exciting of which, for me, was the wild elephants.

Now I’ve seen my fair share of elephants in Southeast Asia, but they’re always domesticated, and honestly, I feel terribly bad for them.  But these elephants are truly wild, roaming between various wildlife sanctuaries, just as elephants should do.

Sri Lanka also boasts the largest density of elephants in Asia.  Despite this, they are still considered endangered as their population has been decreasing year after year due to a shrinking habitat.

At first I figured they must have been brought there by early settlers, but the locals insisted to me that they are native, and bones have been found dating back several hundreds of thousands of years.

The Sri Lankan elephant is one of three recognized subspecies of Asian elephants.  They happen to be the largest and the darkest of the Asian elephants, though still smaller than African elephants. They can reach a height of 8-11.5 feet at the shoulders and weigh up to 5.5 metric tons.

Initially I thought that there must not be many males in the population, but later learned that only 7% of males actually grow tusks.  I wonder how mother nature chooses who the lucky ones are.

The first time I saw the elephants was during a safari at Minneriya National Park near Dambulla in the Cultural Triangle.

I intentionally went in with low expectations, hoping to see perhaps an elephant or two.  What I ended up seeing was at least two hundred elephants eating, mating, playing in the water, and generally doing elephant-y things.

The second safari took place at Yala National Park closer to the southern coastal stretch.  There were still tons of elephants but one thing that stood out was the variety of animals there, which seemed to be out in full force enjoying every moment of the day and every morsel of that beautiful beachside landscape.

What really struck me, and one thing I’m not so sure is a positive, was how close we got to them in our jeeps.  I was of the opinion that elephants can charge at any moment, and that’s not a receiving blow I want to be on the end of.

I can only guess that they’re so inundated with jeeps and people all the time, that though they may be wild, there’s an element of domestication there from the constant human proximity.  (That said, these were all shot with a telephoto lens. We were certainly not close enough to touch).

All said and done, I was so happy to finally see wild elephants after mainly only seeing captive elephants in Thailand, Laos, and Cambodia. Those that are used for the amusement of tourists to ride on lead truly sad lives.

Do you love elephants? Have you seen them in the wild? 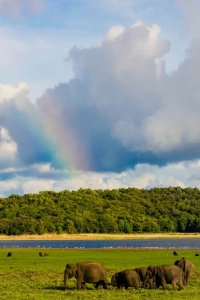 39 shares
« Take the Train in Sri Lanka: The Absolute Best Way to Travel
How to Look Sexy when Traveling: 7 Easy Tips »