The wind caught the parachute several times, but it just wasn’t the right gust. It fell back to the ground followed by the quick scurry of the paragliding staff to spread it back out for just the right moment, just the right pocket of air to pick it up and take us soaring.

Brika, my paragliding guide, was going to get it just right.

It was my first time paragliding.  I had initially come to Nepal for the insanely beautiful trekking, but had heard such good things about the paragliding in Pokhara that I decided to give it a try.

Another gust came rushing through, and this time, we ran to the edge of the cliff in unison before he shouted, “Okay! Sit down now!” and off we went.

I spread my arms like an eagle, surprised at how relaxed it all felt.

Looking down at the lake and rice paddies below, I felt incredibly calm, taking in the miniature world below me as if I was a bird taking my time picking out the perfect spot to land.  The other paragliders floated around the mountains around us, colorful and bright like jellyfish in the sky.

All around me was the green of the grass and the blue of the sky and lake. Toy cars passed below. I seemed detached with that world below me and one with the sky.  It was beautiful and surreal.

But I wanted more.

When you’re not flying tandem, do you do lots of tricks?” I asked him.

“Can you do them with me?” I inquired excitedly.

“Yes, sure,” he replied again.

Taking my GoPro out he snapped a few photos, took a few videos, and continued the smooth sailing for another ten or so minutes.

I worried perhaps he hadn’t understood my request, until he tucked the camera between our harnesses and asked, “okay, are you ready for some acrobatics?”

“YES YES YES!” I certainly was.

He positioned us over the lake, pulled one side of the parachute slightly toward us, and before I knew it, we were spinning.

And spinning, and spinning, and spinning.  The wind began rushing past my ears as we created what seemed like our own makeshift wind funnel. The pressure was enough to almost make me black out, yet I still begged him to do it again.  Once more we twirled and twirled our way towards the lake before waving goodbye to the camera and preparing to land.

We came in running on the ground, a soft landing and a perfect ending to the past half hour spent flying through the skies. As if a cue that the timing had been perfect, the sky opened up, and the afternoon rain started to fall.

I think this might be my introduction to more flying, perhaps in the form of jumping out of a plane next time. 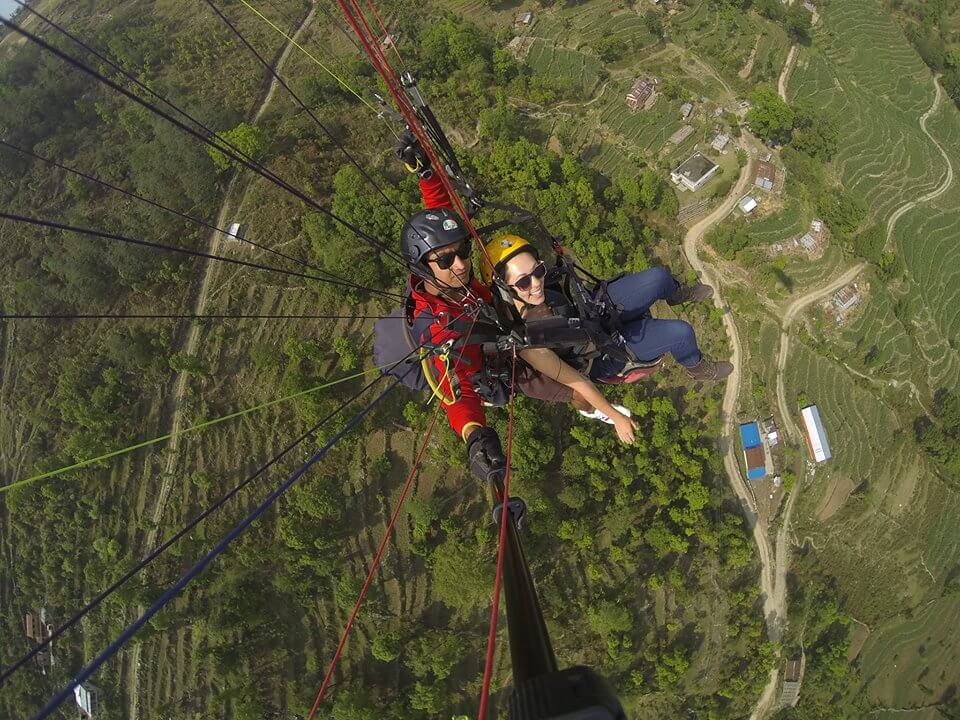