Myanmar’s Kakku Pagodas showed up on my Instagram feed when I was elbow deep in research for my Myanmar trip. Near-ish to Inle Lake, the Mwe Taw Kakku Pagoda Complex seemed like the perfect off the beaten path alternative to the usual lake and temple tour.

Like a corn maze of intricately decorated stupas, varying in color from white to gold, pink, and orange, these 2400+ stupas are arranged in such a way that you can weave through them, getting gloriously lost in a twinkling, bell-sounding forest of Buddhist devotion.

Most of the pagodas were constructed in the 17th and 18th centuries, and many of them have been restored after suffering earthquake damage.

As you walk through you’ll notice that some appear to be even older. It’s believed that some of the stupas date back to King Aluangsithu, the 12th century King of Bagan (even some claims have them built back in the 3rd century B.C.E. under King Ashoka of the Indian empire). It was fun to visit after having seen the mostly-brick ruins of Bagan, imagining that they would have looked much like this had the outer stucco survived the test of time.

The pagodas are located in the Shan State and were mainly constructed by the Pa-O people, the second largest minority group in the state. You’ll notice that the women wear headpieces that look similar to scarves on their heads – I loved their style.

You’ve got a couple of options to visit – either hire a private car like I did and go any time you please, or take a tour if you’d like to have a guide or would rather not go it alone. There are pros and cons to both:

I organized a private car for 50k kyat, plus 5k for the entrance fee. I liked not having to share the experience with many other people. Since the tour groups were almost all gone by the time I arrived at 3pm, I got the experience almost all to myself, complete with wind chiming the bells at the top of the pagodas. I sat and meditated in silence, and it was magical. I also got the pagodas in their best light by staying until sunset.

On the downside, we drove back in the dark, which was of course my choice, and it was quite the adventure, let’s say. However, the driver was very patient and totally willing to wait and drive me back past sunset, which I thought was quite nice. It was also entirely self-guided so my history lesson of the place consisted of Google’s answers.

I’d heard that if you took a private car you’d have to stop in town to pick up a guide, but that never happened so I’m unsure if that’s either no longer a rule, or perhaps I just went too late to need one.

Tours depart Inle Lake and will bring you to Kakku for about the same I paid, plus you get a guide. I could see this being a nice option if you’re solo and would rather not go alone, and you want someone to help you get this famous picture of the experience. Again, the price is the same for all this as hiring a private car assuming you’re solo. You can book it here

You also get a nice historical overview, which I didn’t as a tourist with no guide. But you do get some crowds. Like I said, pros and cons!

Either way the drive takes about an hour and 45 each way from Nyaungshwe, and yes, it’s worth it.

Believe it or not, I never did see Inle Lake. It was quite smokey when I was there, and my only wish was to see Kakku during my short visit, but I did find an amazing place to stay and a crazy place to eat. I loved Inle Cottage Boutique Hotel and thought it was an amazing value. If you want to be truly entertained while eating some amazing Indian food, head to Innlay Hut Indian Food House (313). I’ll leave it at that. Would hate to spoil the surprise.

Happy travels in Myanmar – it’s been one of my favorite countries to date, and Kakku only helped to reinforce that love and wonder. 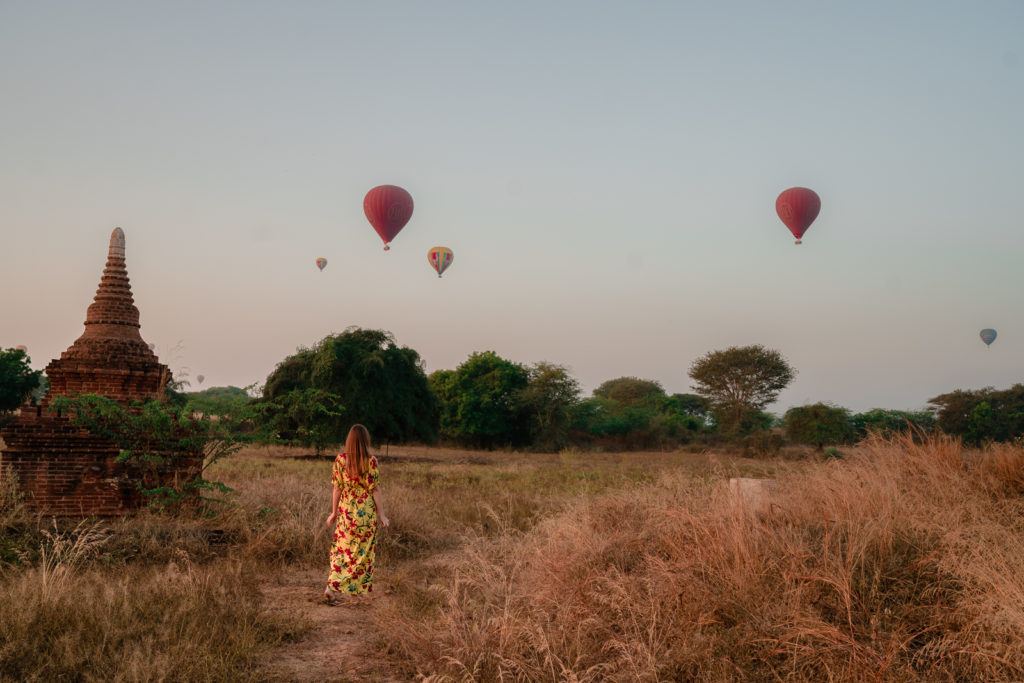 Myanmar
94 shares
« Should Anyone Travel to Myanmar Right Now?
What to Do When You Get Sick While Traveling »