As I sit on the porch of an orange-walled, palm tree-fringed guesthouse in Sri Lanka I can’t help but feel thankful for the past 15 months spent wandering around this beautiful planet.

I never could have imagined what the coming year would have in store for me when I sold off all of my belongings and left California with nothing but a carry-on backpack in September 2012.

It was tough, but after looking through hundreds of photos I narrowed them down to the best 30 I took over the past year, starting with the most recent:

After missing the opportunity to see this last year due to some misinformation, I finally got the chance to be a part of the big lantern release known as Yi Peng in November.

Pictured here, well wishes for the future are symbolically released into the sky in unison.

Western Ireland was absolutely stunning and a chance to better understand some of my roots.

I had returned to the States for a couple of months to visit friends and family.  This is a shot of my lovely yogi sister on the day that we started our new travel fitness website.

Burning Man has become a permanent fixture in my life. An arts festival that promotes radical self-expression and self-reliance, it now usually takes place in late August to early September in the middle of the desert in Nevada.

This is an art car made to look like a rhinoceros with the Temple of Whollyness in the background.

Waking up at 2am to take a motorbike to the base, climbing with the stars glittering above me in the sky, viewing the phenomenon of blue flames, then hiking up to the summit for sunrise remains one of my favorite treks and an amazing memory of Java in Indonesia.

The three-day trek (this photo below was taken on day one) to Mt. Rinjani volcano on the island of Lombok provided so many stunning photo ops, it was hard to narrow it down to just this photo of the volcano surrounded by a jade-colored lake.

An amazing 6 days were spent on a boat in Komodo, going around to the best SCUBA dive sites and spotting everything from mandarinfish to manta rays.

The only places in the world with wild orangutans are Borneo and Sumatra in Indonesia.

Bukit Lawang really stole my heart. It’s the kind of place where everyone knows your name after two days, and they never forget it. I felt so at home in my little jungle domicile. I stayed for a week after initially planning on just a couple of days.

10) Tip of Borneo in Sabah, Malaysia

The tip of Borneo proved to be the most amazing beach I have ever seen.  I had no idea I’d be so impressed by Malaysia (or heck, that I’d even go to Borneo!).

This was taken on a 4-day motorbike adventure with a couple of buddies I had met in my Kota Kinabalu guesthouse.

In a totally impromptu move, I ended up climbing Mt. Kinabalu, one of Southeast Asia’s tallest mountains, in just one day.

It was a grueling full 12 hours of climbing up and then back down, and while it is one of the coolest and most character-building things I’ve done, I have my doubts I’ll be motivated to do it twice!

Tea plantations always seem to be in the most picturesque areas.

It must be some kind of unspoken rule.

The largest Buddhist temple in Malaysia, Kek Lok Si is peaceful and gorgeous.

A fun and relaxed beach town in the northern part of Malaysia.

New Zealand was a special place as it’s where my mother joined me for a couple weeks.  It was our first time traveling together with just us two, allowing us to discover that we’re great travel buddies!

I’ve never seen so many shades of blue in my life.

The same location as photo #16, but this one has dolphins, and no photo journey could be complete without them.

Just a short ferry ride away from Auckland, Waiheke Island is quiet, serene, and a little more off the beaten path.  This was high on our list of favorites from New Zealand.

Snapped on the ferry to Waiheke Island.

I spent two months of this year in Melbourne, Australia.  While there were awesome beaches in the city, Anglesea, a couple hours’ drive away, was unlike any beach I had ever seen.

My favorite beach in Thailand and one of a few places I returned to during my travels, Tonsai (next to Railay, accessed via Krabi or Ao Nang) is laid back and unbelievably beautiful.

I spied a monk in orange in the ancient kingdom of Sukhothai, only to end up later snapping him snapping a photo of me! We then took one together. It was a cool moment.

It’s hard to find the words to describe this place. You simply have to see it, or if you can’t, this gallery is the next best thing.

Bypass the depths of hell to get to the paradise that is the White Temple.

I still say that Laos is my favorite place I’ve been. It’s so green, rugged, and chock full of waterfalls.

A spirit house in Don Det, one of the 4000 islands (I do wonder if anyone has actually counted).

Making all kinds of top ten lists for this year’s must travel places, I’ve got to agree, there’s good reason for all the buzz about Koh Rong.

Most people marvel about the sunrise at Angkor Wat, but I was a massive fan of the sunset.

Where it all began.  This was taken in September 2012, just a few days after I left California.

My home in the days before I started traveling.  Known for being a pretty posh place, I loved this rare and quirky sight.

Thanks for taking this journey with me.  It was a real treat compiling these photos and remembering the great times.

I sometimes get asked what camera I use.  I shot all of these with a Nikon D3000 with a 55/18mm lens and a telephoto lens 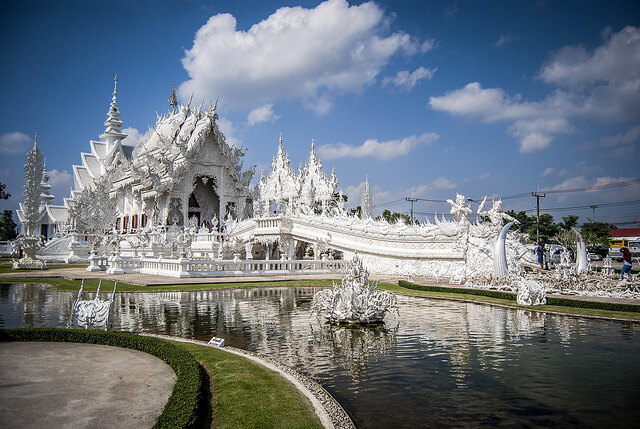 42 shares
« The Pai Land Split: A Testament to Human Perseverance
8 Reasons Why I’m so Hopelessly in Love with Pai »