I can’t say enough words of adoration about the American Southwest. It’s one of the most breathtaking places on Earth, where the sky somehow manages to be bigger and the land brighter.

Arizona contributes in a big way to the region’s allure. The canyons, arches, mountains, and land formations are, at times, out of this world. It would be easy to spend weeks on end exploring all that The Grand Canyon State has to offer.

The best way to take it all in is by camping, which just adds to the outdoor adventure. Read on for Arizona’s must-see spots and the best camping locations to make your home base while you explore them:

(PS: Camping for the first time? Here are 6 mistakes to avoid!)

In northern Arizona, clustered less than ten miles below the state line, is a handful of the state’s most popular attractions – White Pocket (in Vermilion Cliffs National Monument), The Wave, Horseshoe Bend, Antelope Canyon, and Lake Powell can all be found within 50 miles of each other, located in either Page or Marble Canyon.

It goes without saying that the Grand Canyon is massive. In my travels, I’ve visited both the North and the South Rim, and the South is the most visually stunning part of the canyon. Any of the many gorgeous overlooks are absolute must-sees!

Havasu Falls sits on Havasupai tribal lands, in the central curve of the Grand Canyon. The 90-foot waterfall is technically part of the Canyon, but the Havasupai lands sit outside the boundaries of Grand Canyon National Park, so everything having to do with the waterfall is part of the Havasupai reservation. They generously open it up each year, but permits are hard to get, so be sure to secure a permit in February if you wish to go!

After acquiring a permit, you”ll hike 10 miles to the waterfall — no easy feat if you’ve never backpacked before (here’s a packing list to help), but it’s worth the effort!

Monument Valley Navajo Tribal Park, in the northeastern corner of Arizona stretching into Utah, is most commonly referred to as just Monument Valley. The red sand desert is home to amazing buttes rising up out of nowhere. (Two of the formations pictured above are nicknamed “the Mittens”!)

About 100 miles south, in the Chinle-Concho area of Arizona, Canyon de Chelly is also located on Navajo tribal lands. Spider Rock spire, pictured above, is one of the most famous sights in the monument, and with good reason — it’s nearly 800 feet tall! One thing to keep in mind if you visit Canyon de Chelly, though: it’s pronounced like “Shay,” not like “Shelley“!

Petrified Forest National Park in eastern Arizona is home to Painted Desert, a span of multicolored badlands which covers the northern part of the park. The bands of color, formed over time by different minerals layering on top of one another, are such a cool sight. Other things to see at Petrified Forest include fossils, ancient petroglyphs, and sometimes even wildflowers!

Artsy and spiritual, Sedona is a great place to spend a few days. Explore the huge rock formations (the most famous of which are Devil’s Bridge, Bell Rock, and Cathedral Rock), the great hiking in the area, and the energy vortexes!

Other Places to Camp

If you aren’t picky about what you want to see in Arizona but just want a good, free camping spot, there are more free BLM spots near the Phoenix and Tucson regions than anywhere else in the state! There are some cool, lesser-known things to do there, too. For example, check out Saguaro National Park near Tucson, or trek part of the massive Camelback Mountain and visit the Desert Botanical Garden outside Phoenix.

Critical Things to Know About Camping in Arizona

Extreme Heat: Arizona heat, in all its intensity, can make outdoor activities significantly more strenuous. Equip yourself with plenty of water and sunscreen, hydrate in advance, and be aware that a hike you’d have no trouble with in a mild climate could become difficult. The bottom line: Think twice about camping in Arizona during the months of June – September.

Flash Floods: Arizona often sees flash floods, which can come on so quickly and intensely that they can be deadly. Avoid landscapes called “washes,” where the water gets high quickly. (Smooth, round rocks and piles of brush at the bases of trees are telltale signs that you’re in a wash.)

Dress in Versatile Clothing: Temperatures can vary between cool nights and hot afternoons, so be sure to layer your clothing. Intense sun during the day can still give way to chilly nighttime temperatures.

Leave No Trace: While many official campsites do have trash cans and bathrooms, equally as many (such as BLM lands) do not. In order to protect the landscape, be prepared to pack back out whatever you pack in, including used toilet paper.

Responsible Restrooms: Many sites also have bathrooms, but for those that don’t (such as BLM lands), make sure you’re relieving yourself at least 200 feet away from any water source and in a hole 6 to 8 inches deep.

The canyons, warm dry heat, and gorgeous land formations keep me coming back to Arizona again and again. I hope you love it as much as I do! 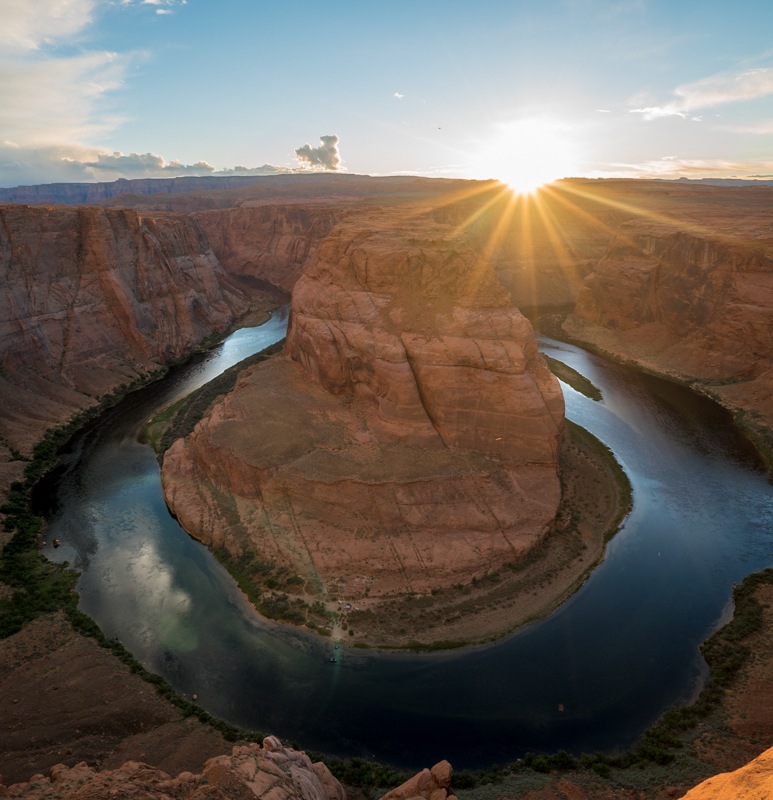