What is it like coming on a BMTM Adventures tour? I’ve shared lots about my experience on the tours, but as the guide I certainly have a different experience than the girls who choose to come on the tour.

So I thought, why not ask them to share about their experience? I was surprised to learn what made them decide to join, and what the best part of it all was for them.

The following are firsthand accounts from Jenn, who came to Peru and Alaska, and Ashley, who came to Namibia and Botswana. These are the things that they saw and experienced on the tours and what made Jenn want to come back again and again:

1. Tell us about you – where are you from, and what led you to sign up for the tours in the first place?

Ashley: I was born and raised in your classic, run-of-the-mill suburban city in north Texas. I’m the youngest of four with three older brothers, so growing up, money and time rarely overlapped long enough for us to travel. It wasn’t until my senior year of college that I left the US for the first time.

But when I finally did, I was hooked! The culture shock inspired me. I was addicted to the feeling of accomplishment that came from stepping out of my comfort zone. I started traveling solo, Couchsurfing, and hitchhiking—then eating lots of crows, of course, as I was adamantly opposed to all of the aforementioned activities in my former life.

My confidence as a traveler was growing. I had visited over 30 countries—half of them solo! Unfortunately, my tattered passport didn’t make me immune to fear. I was still intimidated by certain destinations and, embarrassingly, the entire continent of Africa was one of them.

I wasn’t going to let my fear get the best of me that easily, though. The unknown is always scary. I wanted to challenge those preconceived notions, I just needed the right opportunity…

Jenn: Hey there! My name is Jennifer; I’m from California originally although I’ve moved around a bunch, and I most recently called New York home. Almost a year ago, just before my first BMTM tour, I quit my job to travel, and now I’m living on the road! 🙂

I have pretty much always had the travel bug, and always loved the outdoors, and in the past couple years I’ve tried to stretch my horizons more and more into new activities! When I signed up for my first tour, I was working at a law firm and dreaming of traveling again, but without any extra time or energy for planning. I wanted to get off the beaten track but had zero ability to do the research required to make that happen. I was already planning to quit and travel long-term, and I decided that the tour would be my “drop dead date” by which I would have to officially quit. That was one reason I signed up. But the second (main) reason I signed up for a tour was because I had come to really admire Kristin’s travel (and blogging) style, and I thought that the odds were good I’d have a great time on a trip planned by someone that seemed to share my travel ideals, and that had the same love of adventure and outdoors — which brings me to the next point below!

2. What made you pick a BMTM Adventures tour in particular?

Jenn: I can’t remember when exactly I first started following Be My Travel Muse, but I do remember thinking that Kyrgyzstan had never been on my radar before and now I have to go!! I completely fell in love with Kristin’s beautiful photos and her blog really struck a chord with me. I liked that she traveled adventurously and wrote from the heart, and I admired her ability to find beautiful places in nature and off-the-beaten-path activities. It was clear that connecting with nature was a big part of her travels (mine too!).

After an awkward period of hard fangirling (jk… kind of), I saw her Alaska post and immediately tried to figure out how I too could get there. And then lo and behold, the tours were announced! The first tour announced was to Peru, which had also been on my bucket list for a while, and the itinerary looked amazing. But I think I would have gone almost anywhere, because I was excited about traveling with these *totally awesome* guides whose ideas about travel really resonated with me! And, I’ll admit, I had been *really* hoping the first tour would be to Alaska, so when the second tour to Alaska was announced, I threw caution to the wind and signed up for both. 😀 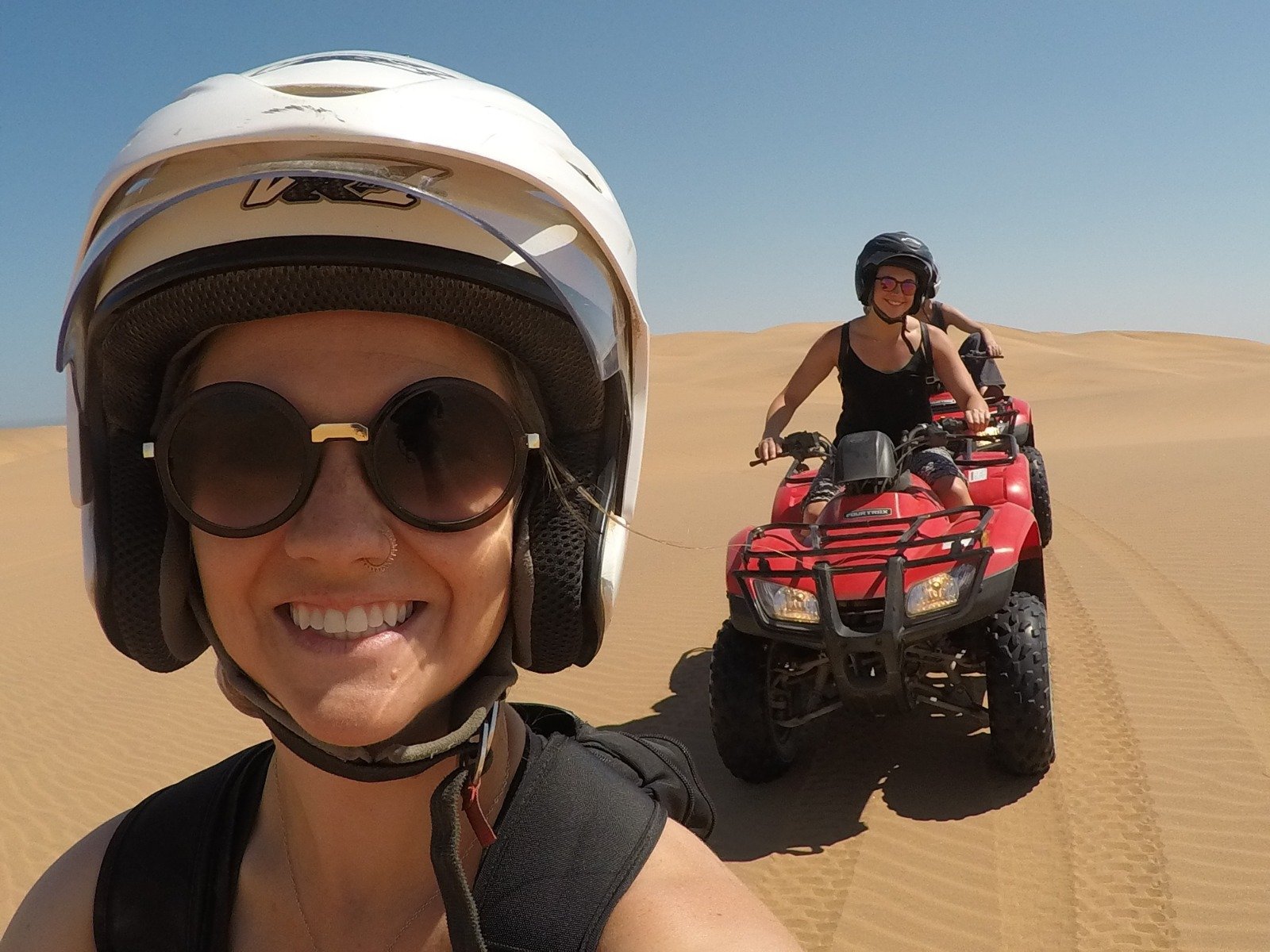 Ashley: I found Kristin and BMTM back in 2013 when I first entered the travel-sphere. I followed her page and forgot about it, honestly. Every once in a while, though, I’d stumble upon her story and think “Dang, this chick is rad. I dig her style. She keeps it real. Also, maybe I should consider updating my slang to the current era?”

When the trip was posted, however, I was apprehensive to commit. I had never traveled with a tour group before, would I even like someone planning everything for me? Did I really need all that was included? And how would it be with so many women? Would there be drama?

The doubt was short-lived, though. Of course, the BMTM Adventures gals were going to be cool! How could they not be? Kristin was thoughtful and empathetic with her content, her followers were bound to have similar qualities. And if I was going to be conquering my fears in the middle of the desert with a bunch of strangers, those are absolutely the kind of strangers I want by my side.

3. You’ve been on a couple of tours now. What made you want to come back?

Jenn: These tours have been everything I was hoping for and so much more! We’ve traveled to amazing places, and each day is always packed with fun, active adventures. I love that the emphasis is on doing awesome things, rather than ticking off a checklist of sights that I’ll forget before I’ve finished editing the photos (because I’m not on top of that shit at all). I have so much confidence now in these tours that I barely need to read the itinerary – I know when we go someplace new that each day will be fun and different, and I just have to be open to it! Pete is an amazing guide, a rare combination of totally competent and organized and completely laid back and funny. Together, Kristin and Pete set a fun and friendly atmosphere.

Which brings me to the so much more. I cannot convey how amazing and special the groups on these tours have been, but I honestly feel so very lucky to have been a part of them. I have met the coolest people that I now get to call friends, and they’ve really impressed me and blown me away. We gelled, we laughed, we had fun and we supported each other the whole way through each tour, and I don’t just mean a clique or a select few — I mean everyone. I have experienced so much awesome positive energy! And going on an adventure with Kristin (and many other fellow photography-lovers) means I felt completely encouraged to embrace my inner silliness and had the confidence to get the picture I wanted, where I sometimes felt silly posing. But what that means is that my albums are no longer full of awkward smiles in front of things, but fun, exhilarating, sometimes silly poses that later show so much more accurately how I felt in that moment.

4. What was your favorite part of it?

Jenn: Where do I start? Being in the middle of nowhere, laughing about something ridiculous, taking in a gorgeous view and probably snacking.

I’ll always remember, “Whose feet are hot?” which Pete said for the 8th time that day as we forded yet another river in already sloshy boots on Day 7 of our 8-day backpacking trip. I think it speaks volumes about this group that we embraced this basic discomfort with so much entertainment and good humor and, because of that good energy, had fun with it. 🙂

It’s travel, things never go according to plan. There was unpredictable weather, washed out bridges, rough roads, and vehicle breakdowns, but all those “mishaps” made our bonds stronger.

When it rained on our safari, we zipped up the windows, put on some jams, and made it a party.
When it stormed at the Tropic of Cancer, we hopped out in the puddles and took wet photos.
When the roads we drove were rough, we laughed and called it an African massage.
When the rain washed out the road, we literally held hands and forged our way across!

I mean, c’mon, it doesn’t get more beautiful than creating a human chain to overcome a challenge together! Those ladies quickly became my unconventional sisters, spanning over 40 years in age and three continents. It was a wonderfully unexpected surprise.

6. Is there anything you’d like to tell anyone who comes on a future BMTM Adventures trip?

Ashley: A tour is only as good as its guide, so you have nothing to worry about!

Kristin is awesome. She has a calming nature about her and a genuineness that is magnetic. Pete, her right hand man with BMTM Adventures, is a perfect complement—charismatic and completely unfazed by the conversations that occur when you put 16 women in a van. Together, the pair is unstoppable. I always felt included, never once felt unsafe, and when there were hiccups, Kristin & Pete handled them behind the scenes while the rest of us remained blissfully unaware. They’re professionals without all that corporate stiffness, as responsible as they are silly.

It’s normal if you’re a little nervous. Foreign places, new people—it’s a lot to navigate! But you are in the most capable of hands with BMTM Adventures. You and your future friends are about to have the adventure of a lifetime! Got any room for me in your suitcase?

Click here to join the next trip to Iceland in July or Galapagos in October!